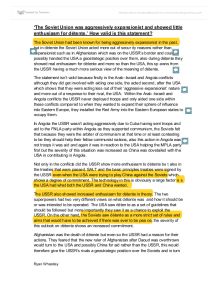 The Soviet Union developed its influence in Eastern Europe in the years 1945 1949 because it simply wanted to guarantee its security in the future. How valid is this assessment?

'The Soviet Union was aggressively expansionist and showed little enthusiasm for d�tente.' How valid is this statement? The Soviet Union had been known for being aggressively expansionist in the past, but in d�tente the Soviet Union acted more out of security reasons rather than expansionist such as in Afghanistan which was on the USSR's border and could of possibly handed the USA a geostrategic position over them, also during d�tente they showed real enthusiasm for d�tente and more so than the USA, this spawns from the USSR having a much more serious view of the meaning of d�tente. The statement isn't valid because firstly in the Arab-Israeli and Angola conflicts although they did get involved with aiding one side, the acted second, after the USA which shows that they were acting less out of their 'aggressive expansionist' nature and more out of a response to their rival, the USA. ...read more.

SALT and the basic principles treaties were signed by the USSR even when the USA were trying to play China against the Soviets which shows a degree of commitment. The technology in this is obviously a large factor as the USA had what both the USSR and China wanted. The USSR also showed increased enthusiasm for d�tente in theory. The two superpowers had two very different views on what d�tente was and how it should be or was intended to be operated. The USA saw d�tente as a set of guidelines that should be followed but more importantly they saw it as a chance to exploit the USSR. On the other hand, the Soviets saw d�tente as a more strict set of rules and aims that would have to be achieved if there was ever to be peace, the severity of this outlook on d�tente shows an increased commitment. ...read more.

The USSR can also be criticised in d�tente for its contribution in Angola, with Cuba already involved they didn't really need to become involved as there was already one communist nation supporting the MPLA. It can be seen as the USSR were acting in Angola to counter the USA's and China's involvement rather than for the preservation of communism. To conclude it isn't fair to agree with the statement because throughout d�tente the USSR showed enthusiasm, often that greater than the USA's and were only aggressively expansionist over Afghanistan and that can be argued that it was for security. The main point regarded the USSR's enthusiasm is that they perceived d�tente to be much more important and have a greater meaning on a global scale than the USA and they weren't aggressively expansionist due to them not putting troops on the ground in places outside their sphere of influence (Arab-Israeli and Angola conflicts) and were acting in response to the USA getting involved in these places first. ?? ?? ?? ?? Ryan Wheatley ...read more.

There are many positive features of this response; the author writes analytically throughout and stays firmly focused on the precise question in each paragraph. Judgements are sound and usually supported by evidence, although this could be expanded in places. However, the lack of dates is a weakness and grammatical errors detract from the clarity of the argument. 4 stars .