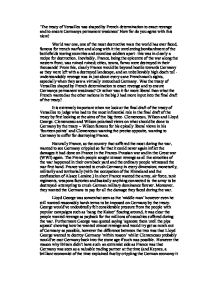 The treaty of Versailles was shaped by French determination to exact revenge and to ensure Germanys permanent weakness How far do you agree with this view?

Furthermore George was quoted saying 'squeeze them until the pips squeak' showing how he wanted utmost revenge and would try get as much out of Germany as possible, however the difference between the two was that Lloyd George wanted to destroy Germany 'within reason' whilst Clemenceau probably would've cast Germany back into the stone age if such was possible. However the reason why Britain didn't have such an extremist side as France was that Germany was seen as a valuable trading partner at the time (and Keynes, a brilliant economist of the time explained that by crippling the German economy it would thus cripple all of Europe's great economies leading to great depression- this stuck fear into Lloyd George and thus why he was more hesitant to cripple Germany than Clemenceau was). Furthermore Britain did not want to see France become the most powerful nation in Europe and lastly and most importantly it was France where the war effort did the most destruction so Britain wasn't effected nearly as much. Finally America, under Wilson was by far the most liberal of the three nations. ...read more.

intervene immediately, however this also backfired as both America and Britain both refused to sign the pact and America couldn't be seen to be signing secret treaties, and thus Britain wouldn't sign if America didn't! France was clearly left feeling hard done by, and although the treaty did provide them with lots of Clemenceau's aims, the French public felt what the treaty enforced was far too lenient, thus choosing to kick Clemenceau out of power showing how harsh thy treaty needed to be in their eyes- even thought they managed to crush Germany economically and monetarily they wanted to crush Germany further. In conclusion I feel that France did attempt to 'exact revenge and to ensure Germanys permanent weakness,' however it didn't not manage to shape the treaty to the extent it wanted, hence why Clemenceau was taken as a scapegoat and was evicted from power. I feel that Britain, being somewhat of the middle man managed to largely shape the treaty being able to pick and choose what they thought was best from American and French aims whilst adding points to their benefit. ...read more.