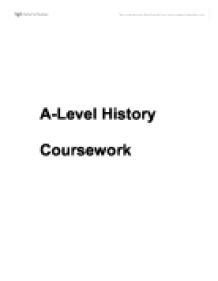 a) &quot;How far do these sources support the view expressed in source one that, in the years 1067-1075, William had favoured conciliation in his attempts to establish peace in England?&quot;

A-Level History Coursework a) "How far do these sources support the view expressed in source one that, in the years 1067-1075, William had favoured conciliation in his attempts to establish peace in England?" The view of William I favoring conciliation in his attempts to establish peace, to a certain extent, do agree with a number of the sources. This is only to a degree due to events that occurred between the years 1067 and 1075 that pushed William into more brutal and violent methods of subduing the English and securing his authority over England. Sources that do agree with William I using peaceful procedures to establish peace are sources three and four. Both sources to a great extent agree with the first source. Source three depicts how appeasement established authority. The source describes the naval and land levies, proving that William favoured conciliation. William had enough trust with the English to take them to war with him, and that they would not mutiny. This trust can be linked with source four; William felt strong enough to leave England in the hands of William fitz Osbern and go to Normandy. However, did the English really have a choice? With the erection of castles, the use of cavalry, and Norman landholders, the English may have been forced to fight for him; there is little detail of the events or others before or after. Source four also agrees, for throughout the duration of the documents Lanfranc negotiates peacefully with Roger warning him of the seriousness but giving him a second chance. Lanfranc assures him, "of safe conduct", and to "give the earl what help he can, saving his allegiance". The source is limited due it being correspondence over just the year 1075. Before and after this date other issues may have aroused, and the letters are not written by William I but by Lanfranc1 who was a very trusted friend to William. ...read more.

William to counter-act this made a series of lighting raids through Warwick, Nottingham, York, Lincoln, Huntingdon and Cambridge to show his presence as the new King. In reaction to the revolts in the North, William marched North with troops from York and Nottingham, devastating the countryside, slaughtering all adult males and pillaging as he went, killing animals and burning crops. This was called the "Harrying of the North" and the destruction of the land was so terrible that when mentioned in the Domesday Book, 20 years later, it was classed as a "waste" land. From Yorkshire William pushed his men across the Tees in the winter and took Chester, and Stafford, and was back in Winchester before Easter 1070. Due to the revolts and the resulting victories for William, who had either killed or utterly suppressed the resistance, he had to enforce his power, and show that the Normans were the new rulers and would not leave. William accomplished this by first building motte-and-bailey castles across England. William began to e***t them right at the start of his campaign, even before the battle of Hastings, and they were virtually unheard of in England. William built hundreds across England, to show the Norman's strength and power over the population. This geopolitical process meant that they exerted control over the surrounding countryside. The Normans would demolish houses in the centre of towns to e***t a castle. This happened in towns such as Cambridge, Lincoln and Dorchester2. These castles were, and still are, "looming features over the landscape"3. They were built in the centre of towns for economic reasons; the material or foundations of earlier fortifications (Roman/Saxon) were there already, and also it was cheaper to build on existing forts rather than building on top of a hill, having to transport supplies and food up it. Another affect of castles was their psychological affect on the Saxon population. ...read more.

as well. Most Norman sheriffs were aristocrats who had much more wealth and power than the previous Anglo-Saxon sheriffs. A final instrument used by William I to completely assert his authority on the country was the production of the Domesday Book6. This book allowed the King to find out who had what and who owed what, twenty years after his seizure of the kingdom. The Domesday Book also shows us how sophisticated the Anglo-Saxon government was before the Normans. Without the shires, hundreds and sheriffs this type of "census" would have been near impossible to make. The Domesday Book is a record of a conquered kingdom, but it is a testament to the survival of the Anglo-Saxon government in many aspects. William I was aided by the revolts (1069-75) to a great extent. The revolts changed the King from conciliation to consolidation. However, the revolts, the castle building, the revolutionary change of the earldoms and the church, came, all, after the revolts. A new set of values had been introduced into England; these were based upon loyalty and military service. The government of the new king was based upon the traditional procedures and customs of Edward the Confessor but was enforced with a savage energy inspired by, mainly, the revolts between the years 1069-75. (2191 words) Foot Notes; 1. William the Conqueror's deathbed confession, from Orderic Vitalis "The Ecclesiastical History" written 1123-41. 2. Cambridge (27 houses were demolished), Gloucester (16 houses demolished), Lincoln (166 houses demolished), and in Dorchester (an area of 150,000 square metres was taken up). 3. Article in History Today, Volume 53, Issue 4. 4. Article in History Today, Volume 53, Issue 4. 5. Article in History Today, Volume 53, Issue 4. 6. The Domesday Book was written in 1086, and was so-called due to its verdicts being just as unanswerable as the Book of the Day of Judgment. It was written in Latin, on parchment and includes 13,400 place names on 888 pages. No other country in the world produced such a detailed historical record at such an early date. 2 ...read more.