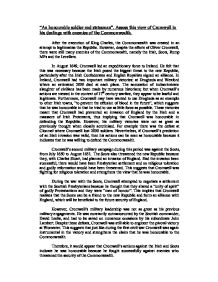 An honourable soldier and statesman. Assess this view of Cromwell in his dealings with enemies of the Commonwealth.

"An honourable soldier and statesman". Assess this view of Cromwell in his dealings with enemies of the Commonwealth. After the execution of King Charles, the Commonwealth was created in an attempt to legitimatise the Republic. However, despite the efforts of Oliver Cromwell, there were still many enemies of the Commonwealth, namely the Irish, Scots, Rump MPs and the Levellers. In August 1649, Cromwell led an expeditionary force to Ireland. He felt that this was necessary because the Irish posed the biggest threat to the new Republic, particularly after the Irish Confederates and English Royalists signed an alliance. In Ireland, Cromwell had two important military victories: at Drogheda and Wexford where an estimated 2000 died at each place. The accusation of indiscriminate slaughter of civilians has been made by numerous historians; but when Cromwell's actions are viewed in the context of 17th century warfare, they appear to be lawful and legitimate. ...read more.

However, Cromwell's military leadership was not as great as his previous military engagements. He was constantly outmanoeuvred by the Scottish commander, David Leslie, and had to be saved on numerous occasions by his subordinate John Lambert. Despite these defeats, Cromwell was still able to engineer the pivotal victory at Worcester. This suggests that just like during the first civil war Cromwell was again instrumental in the victory and strengthens the claim that he was honourable to the Commonwealth. Therefore, it would appear that Cromwell's actions against the Irish and Scots indicate he was honourable because he fought successfully against enemies who threatened the security of the Commonwealth. Another enemy of the Commonwealth was the Rump MPs who governed the country after the regicide of King Charles. They consisted mainly of merchants and lawyers and were thus unwilling to proceed with some aspects of the godly reformation such as legal reform. ...read more.

before crushing them. The Levellers' frustration and resentment at Cromwell is epitomised by Lilburne's pamphlet "England's New Chains"; they felt that Cromwell had used them, indicating dishonourable conduct. However, the Levellers had been using the New Model Army to advance their radical political demands. Therefore, the claim of Cromwell using the Levellers appears to be hypocritical. Furthermore, in getting rid of the Levellers, Cromwell can be viewed as protecting God's instrument and thus is once more acting in God's interest rather than his own. Therefore, Cromwell's actions against the Levellers are yet another demonstration of him being an honourable statesman and soldier for the Commonwealth. When viewed alongside Cromwell's dealings with other enemies of the Commonwealth, it appears that Cromwell has consistently showed honourable behaviour. In conclusion, "an honourable soldier and statesman" is a valid and rightful interpretation of Cromwell in his dealings with the Irish, Scots, Rump MPs and Levellers. His actions reveal that he was consistently honourable in defending the integrity of the new Republic and trying to introduce godly reformation. ...read more.