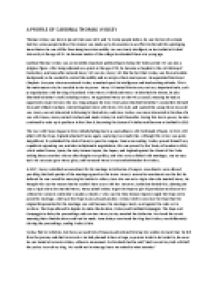 A Profile of Cardinal Thomas Wolsey

﻿A PROFILE OF CARDINAL THOMAS WOLSEY Thomas Wolsey was born in Ipswich between 1471 and 74. Some people believe he was the Son of a simple butcher, some people believe this rumour was made up by his enemies in an effort to discredit his upbringing. Nevertheless he was still far from being born into nobility. He was clearly intelligent, as he studied at Oxford University at the age of 15. He became master of the college he attended there at a young age. Cardinal Thomas Wolsey was an incredibly important political figure during the Tudor period. He was also a religious figure. After being ordained as a priest at the age of 25, he became a chaplain to the Archbishop of Canterbury, and soon after entered Henry VII?s service. ...read more.

During this rise to power, he also continued to raise up in positions in the Church, becoming the Canon of Windsor and became a Cardinal in 1515. The War with France began in 1512; initially failing due to a weak alliance with Ferdinand of Spain. In 1513, still allied with the Pope, England attacked France again, capturing two small cities. Although this victory was quite insignificant, it symbolised the start of Henry?s quest to conquer France succeeding. Wolsey proved himself very capable at organising war, and also in diplomatic negotiations, this was proved by the Treaty of London in 1518, which united France, Spain, the Holy Roman Empire, the Papacy and England against the threat of the Turks. Uniting these countries who so often fought over politics, and who were so linked with marriages, was no easy task. ...read more.

Wolsey tried to convince the Pope that the original dispensation for the marriage was void because the marriage clearly went against the rules set in Leviticus. The Pope allowed to legates to make the decision, Wolsey and Cardinal Campeggio. The Pope sent Campeggio to delay the proceedings and convince Henry to stay married the Catherine. He closed the courts meaning that a final decision could not be made. Anne Boleyn convinced the King that Wolsey was deliberately slowing the proceedings, sealing Wolsey?s fate. Wolsey fled to Yorkshire, but Henry accused him of treason and ordered him back to London to stand trial. He fell ill on the journey and died in Leicester. He had planned to have a huge, expensive tomb to be buried in, however he was buried at Leicester Abbey without a monument. On his death bed he said ?Had I served my God with half the zeal as I served my King, He would not in mine age leave me naked to mine enemies? ...read more.