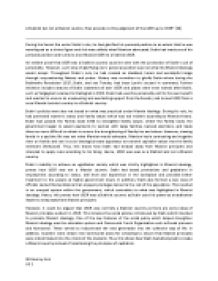 A Stalinist but not a Marxist country. How accurate is this judgement of the USSR up to 1939?

Transfer-Encoding: chunked ﻿A Stalinist but not a Marxist country. How accurate is this judgement of the USSR up to 1939? [30] During the Soviet Era under Stalin?s rule, he had glorified his personal position to an extent that he was worshipped as a divine figure and this was unlikely what Marxism advocated. Stalin had made use of his personal position and turned a once Marxist USSR to a Stalinist USSR. An evident proof that USSR was a Stalinist country could be seen with the promotion of Stalin?s cult of personality. However, such idea of glorifying one?s personal position was not what the Marxist ideology would accept. Throughout Stalin?s rule, he had created an idealized, heroic and worshipful image through unquestioning flattery and praise. History was re-written to glorify Stalin where during the Bolsheviks Revolution 1917, Stalin, and not Trotsky, had been Lenin?s second in command. Further evidence includes statues of Stalin scattered all over USSR and places were even named after Stalin, such as Volgograd renamed to Stalingrad in 1925. ...read more.

Thus, this shows how Stalin had strayed away from Marxist principles and intended to apply rules according to his liking. Hence, USSR was seen as a Stalinist and not a Marxist country. Stalin?s inability to achieve an egalitarian society which was strictly highlighted in Marxist ideology, proves how USSR was not a Marxist country. Stalin had based promotions and gradations in employment according to status, skill level and experience in the workplace and provided better treatment to the people at higher government levels. In addition, Stalin also formed a new class of officials named Nomenklatura that enjoyed privileges denied to the rest of the population. This resulted in an unequal system within the government, which contradicts to what was highlighted in Marxist ideology. Hence, this proves how USSR was a Stalinist country as Stalin used his power as a totalitarian leader to stray away from Marxist principles. However, it could be argued that USSR was not fully a Stalinist country as there are some ideas of Marxist principles evident in USSR. ...read more.

Furthermore, Stalin?s approach on improving the USSR?s economy by following communist principles highlights how USSR was also characterized as a Marxist country. He did this through state monopoly of economy, where the state owned virtually all productive assets and ran a central planned economy via collectivization and 5 Year Plan. Under the central planning committee, Gosplan, Marxist principles were successfully implemented by erasing any capitalist ideas through the elimination of Kulaks and the introduction of the Collectivised agriculture lands. Hence, this shows how Stalin also made efforts to create a Marxist country by following a Marxist approach on economy. In conclusion, it could be agreed that USSR could be characterized as a Stalinist country because Stalin had misused his power to stray away from the Marxist principles. However, it was also evident that Stalin had also tried to include several Marxist principles in his policies such as his social and economic policies which intended to strengthen the Marxist ideology. Mark obtained: 24 out of 30 (80%) Written by: Erni U3.1 ...read more.