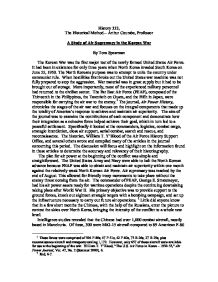 A Study of Air Supremacy in the Korean War.

History 333, The Historical Method-- Arthur Coumbe, Professor A Study of Air Supremacy in the Korean War By Tom Spearman The Korean War was the first major test of the newly formed United States Air Force. It had been in existence for only three years when North Korea invaded South Korea on June 25, 1950. The North Koreans purpose was to attempt to unite the country under communist rule. When hostilities first broke out the United States war machine was not fully prepared to stop the aggression. War material was in great supply but it had to be brought out of storage. More importantly, most of the experienced military personnel had returned to the civilian sector. The Far East Air Force (FEAF), composed of the Thirteenth in the Philippines, the Twentieth on Guam, and the Fifth in Japan, were responsible for carrying the air war to the enemy.1 The journal, Air Power History, chronicles the stages of the air war and focuses on the integral components that made up the totality of America's response to achieve and maintain air superiority. The aim of the journal was to examine the contributions of each component and demonstrate how their integration as a cohesive force helped achieve their goal, which in turn led to a peaceful settlement. Specifically it looked at the commanders, logistics, combat cargo, strategic interdiction, close air support, aerial combat, search and rescue, and reconnaissance. The historian, William T. Y'Blood of the Air Force History Support Office, and several others wrote and compiled many of the articles in the journal concerning this period. The discussion will focus and highlight on the information found in these articles to determine the accuracy and relevancy of their historiography. The plan for air power at the beginning of the conflict was simple and straightforward. The United States Army and Navy were able to halt the North Korean advance because FEAF was able to obtain and maintain air superiority within one month against the relatively weak North Korean Air Force. ...read more.

I became particularly irate when I found new holes very near a main wing tank. I walked over to the radio jeep and told the operator. He called down two fighters and each dropped a napalm tank on the knoll. Blood curdling screams rose up as the deadly liquid rolled downhill. After that show of air superiority, I returned to my C-47 and got on board. As my eyes transitioned from bright sunlight to dim interior light, I eyed my load: a significant number of men lay frozen as they had fallen, with their extremities cast in all directions and faces contorted statues of severe pain. They were stacked and intertwined on each side of the cabin, secured with ropes for flight. I would be flying an aerial hearse, but to do it with dignity I flew extra smoothly. 25 From Colonel Fritz's account it is apparent that even those who flew cargo missions were not immune from hostile activity. After the battle line stabilized at the 38th parallel his squadron was put at further risk when it was decided a forward operating detachment would be established at Kimpo, South Korea. The journal Air Power History covers the role of airlift and logistics in several articles, emphasizing the importance of its role. It relied upon primary sources, such as the author noted above and secondary ones, to include William Y'Blood and William Suit. Logistics and movement of cargo by air were almost like a single entity in that they were the life-blood for the troops on the ground and pilots fighting in the air. The war simply could not have been won without their contribution. The next part of this paper will focus on the combatants who fought in the skies over Korea and the role they played to help win air supremacy. Specifically it will analyze FEAF's strategic and tactical efforts, including their failures and successes. ...read more.