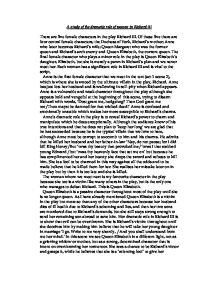 A study of the dramatic role of women in Richard III.

A study of the dramatic role of women in Richard III There are five female characters in the play Richard III. Of these five there are four central female characters; the Duchess of York, Richard's mother; Anne who later becomes Richard's wife; Queen Margaret who was the former queen and Richard's arch enemy and Queen Elizabeth, the current queen. The final female character who plays a minor role in the play is Queen Elizabeth's daughter, Elizabeth, but she is merely a p**n in Richard's plan and we never meet her. Each woman has a significant role in Richard III and is vital to the script. Anne is the first female character that we meet in the text (act 1 scene 2), which is where she is wooed by the ultimate villain in the play, Richard. Anne has just lost her husband and is wallowing in self-pity when Richard appears. Anne is a vulnerable and weak character throughout the play although she appears bold and vengeful at the beginning of this scene, trying to disarm Richard with words, 'Dost grant me, hedgehog? Then God grant me too/Thou mayst be damned for that wicked deed!' Anne is confused and emotionally unstable which makes her more susceptible to Richard's charms. Anne's dramatic role in the play is to reveal Richard's power to charm and manipulate which he does exceptionally. ...read more.

She sees a chance to be Richard's victor and grasps it, while he believes that she is a 'relenting fool' to give her daughter up so easily. She is manipulative and uses her own daughter as a p**n in her private game of power, for she does not give her daughter to Richard but offers her to Richmond, who becomes king after killing Richard in battle. The audience are introduced to Queen Margaret in the same scene that they are introduced to Queen Elizabeth. Shakespeare has chosen to do this because Queen Elizabeth is Queen Margaret's alter ego. Queen Margaret reveals antagonism for the woman who has made her shadow which causes great tension in this scene. Shakespeare has altered history by retaining Margaret because originally she never returned to England after the deaths of her son and husband. Not only does he bring her back to England but he gives her an important role in the play. She acts as a narrative voice, predicting the doom of those who are to blame for the deaths of her son and husband and also to those whom she resents and blames for her loss of power. To Queen Elizabeth she predicts that she will 'Die neither mother, wife, nor England's queen!' She also predicts for Richard that he will have dreadful nightmares 'No sleep close up that deadly eye of thine/ Unless it be while some tormenting dream/ Affrights thee with a h**l of ugly devils!' ...read more.

He is totally oblivious to Richard's innate evil and meets a terrible death. The audience who are aware of Richard's true character like him despite all his murders because he is a lovable rogue. His mother who also knows of his true character despises him. She, unlike us, is not susceptible to his charms. Her dramatic role in the play is to reveal his evil to us because we are under his spell. One of the most dramatic scenes in this play is Act IV scene 4 when Queen Elizabeth, Queen Margaret and the Duchess of York unite to overthrow King Richard. Queen Elizabeth seeks to create a bond with Queen Margaret because they both want the same thing; King Richard's end. It is a powerful and dramatic scene because they have all been victims of King Richard and finally realise that they have to support each other because they have no-one else. Queen Elizabeth asks Queen Margaret for instructions in cursing 'O thou well skilled in curses, stay a while/And teach me how to curse mine enemies!' which I believe is her way of saying sorry and treating her as an equal. The women in this play are vital to the script and although they have no power whatsoever in this play, without them neither would Richard. Part of each of the female characters role was to show that in their era it was the men that held the power and the women were entirely powerless which Shakespeare presented superbly. Kelly Nicholls 12.2 ...read more.