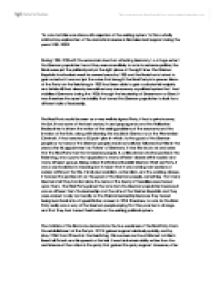 To vote for Hitler was above all a rejection of the existing system. Is this a wholly satisfactory explanation of the dramatic increase in n**i electoral support during the years 1930-1933?

'To vote for Hitler was above all a rejection of the existing system.' Is this a wholly satisfactory explanation of the dramatic increase in n**i electoral support during the years 1930-1933? During 1930-1933 with the economic downturn effecting Germany to a huge extent the German population found they were more likely to vote for extreme politics; the Nazis were just the political party in the right place at the right time. The Weimar Republic had looked weak for several years by 1933 and the Nazis had started to gain votes but it was not just the votes that brought the n**i Party into power. None of the Party's in the Reichstag in 1932 had been able to gain a substantial majority and Article 48 had already demolished any democracy or political system that had stabilised Germany during the 1920s through the leadership of Stresemann or Ebert, it was therefore the quest for stability that turned the German population to look for a different style of leadership. The n**i Party could be seen as a very well designed Party, it had a private army, the SA, it had some of the best orators, it used propaganda and the Volkischer Beobachter to inform the nation of the arising problems of the economy and the invasion of the Ruhr, along with blaming the trouble in Germany on the 'November Criminals'. ...read more.

The n**i Party was born in the economic downturn after the First World War. It was very much a people's party and the issues raised by Adolf Hitler at the meetings were very much geared around the public attitude towards the 'November Criminals' and the 'Treaty of Versailles'. The hyperinflation was therefore an external factor that allowed the Nazis to gain more support and for the Party to be strengthen. At the invasion of the Ruhr the Nazis again turned their focus to campaigning, using propaganda, and voicing public opinion about the betrayal of the Weimar and the breaking of the Treaty of Versailles by the French. It was from the foundations laid in the 1920s, by using propaganda and rallies and media, along with the terror tactics and the strength of the SA that persuaded the German people to vote for the Nazis and away from the more moderate parties in the Reichstag. The Nazis were successful at attracting the support of the young, particularly students; in 1930 over two-thirds of the party's members were under the age of 40. It was this that the Nazis were very good at. They encouraged the younger generation to vote for them, they captured the hearts and the minds of the young people, making them believe that the party was aimed at the good of the German Volk. ...read more.

Everything that went on within the depths of the Nazis Party was not discussed or publicised further than the people closest to Hitler. As the confidence in the Weimar Republic dropped and the gaps within the system started to emerge they were heavily publicised and people could see that it was breaking down from the inside out. After the death of Stresemann, Germany never really recovered its leadership until Hitler took the chancellorship in January 1933. It was therefore through the portrayed stability of the structure of the Party, a party with its own army and a heroic orator that the votes for the Nazis started to increase. You could argue that it was not Hitler that made the German people vote for the n**i Party. We can see that whilst Hitler was imprisoned in Landsberg there were still people prepared to vote for the n**i Party and that it had been steadily supported throughout the 1920s. Equally, when Hitler appears on the stage again in 1928 and reclaims the party the vote significantly increases and makes it more plausible that it was the combination of the Nazis Party's contrasting views, compared to the Weimar Republic's views, and the leadership of Hitler that encouraged and persuaded more people to vote for the n**i Party between 1930-1933. ...read more.