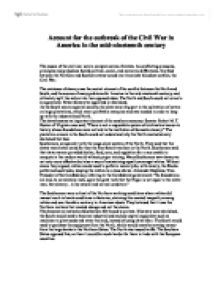 Account for the outbreak of the Civil War in America in the mid-nineteenth century The causes of the civil war were a complex series of events. As conflicting pressures, principles and prejudices fueled political, social, and economic differences, this feud between the Northern and Southern states turned into America's bloodiest conflict, the Civil War. The existence of slavery was the central element of the conflict between the North and South, and the source of many problems for America in the mid-nineteenth century, and ultimately split the nation into two opposed sides. The North and South could not come to an agreement. Either Slavery be approved or abolished. As the South was an agrarian society, the slave was a big part in the cultivation of cotton on large plantations, which was a profitable enterprise and was needed in order to keep up with the industrialized North. The slave became an important element of the southern economy. Senator Robert M. T. Hunter of Virginia once said: "There is not a respectable system of civilization known to history whose foundations were not laid in the institution of domestic slavery." The plantation owners in the South could not understand why the North wanted slavery abolished that bad. Southerners compared it with the wage-slave system of the North. ...read more.

In an attempt to resolve the Southerners concerns, he said, "I have no purpose, directly or indirectly, to interfere with the institution of slavery in the States where it exists..I have no inclination to do so". The south could not afford to have slavery abolished. Their whole society was based around it. They realized that unless they fight for slavery it would be abolished. They felt there was nothing more they could do. They were convinced that they should make a bid for independence by succeeding rather then face political isolation. A Southerner said "We have at last reached that point in our history when it is necessary for the South to withdraw from the Union. This has not been our seeking...but we are bound to accept it or self-preservation." Lincoln took the view that although slavery was legal; breaking away from the Union was illegal and constituted a rebellion. When Southern forces opened fire, the Civil war began. Abraham Lincoln's will to unite America had been unsuccessful and his election to presidency no doubt allowed for further discontent from the south and added to the reasons for an outbreak of an internal war. The existence of slavery was the central element of the conflict between the North and South. Other problems existed that led to succession but none were as big as the slavery issue. The government failed to address problems as they arose. The combination of these issues resulted in the outbreak of the Civil War. ...read more.