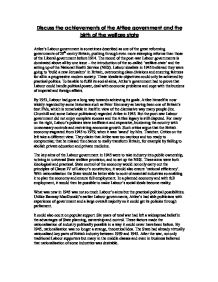 Discuss the achievements of the Attlee government and the birth of the welfare state Attlee's Labour government is sometimes described as one of the great reforming governments of 20th-centry Britain, pushing through even more sweeping reforms than those of the Liberal government before 1914. The record of the post-war Labour governments is dominated above all by one issue - the introduction of the so-called 'welfare-state' and the setting up of the National Health Service (NHS). Labour idealists in 1945 believed they were going to 'build a new Jerusalem' in Britain, overcoming class divisions and ensuring fairness for all in a progressive modern society. These idealistic objectives could only be achieved by practical politics. To be able to fulfil its social aims, Attlee's government had to prove that Labour could handle political power, deal with economic problems and cope with the burdens of imperial and foreign affairs. By 1951, Labour had gone a long way towards achieving its goals. Attlee himself is now widely regarded by some historians such as Peter Hennessy as having been one of Britain's best PMs, which is remarkable in itself in view of the dismissive way many people (inc. Churchill and some Labour politicians) regarded Attlee in 1945. But the post-war Labour government did not enjoy complete success and the Attlee legacy is still disputed. For many on the right, Labour's policies were inefficient and expensive, burdening the country with unnecessary controls and restricting economic growth. ...read more.

They argued that these would be run more efficiently under private ownership and when they came to power in 1951 they denationalised these industries. The national mood in the mid-1940's, however, accepted most of the nationalisation programme; debate at the time was more about its extent and cost. Between 1946 and 1951, the post-war Labour governments succeeded in taking into public ownership 20 per cent of economic enterprises, employing 10 per cent of the workforce. The State, in the name of the people, now owned and controlled most of fuel and power productions, transport, the steel industry and the Bank of England. Nationalisation brought improvements in some industries. The supply of electricity and gas was expanded. There was a growth in civil aviation and in cable and wireless communication. Electrification was extended to more and more remote parts of the country. Although when the Conservatives came to power in 1951 they reversed the nationalisation of road transport and steel, they left the rest of the nationalised industries in State ownership until the late 1980s. However, the nationalisation programme cost a lot of money. Private owners had to be compensated and this cost �2,700 million, money which some have argued, both at the time and since, could have been better spent. Labour had also burdened taxpayers with some seriously run down, unprofitable industries which would have to be subsidised indefinitely, such as coal mining and the railways. Nor did the nationalised industries always benefit from State control. ...read more.

Attlee's government was committed to making welfare provision universal (open to everyone) and free of charge. This commitment was partly due to ideology - Labour had been committed to free education, a free health service, abolishing the old Poor Law and means testing for decades. Labour interpreted socialism as providing collectively for the needs of all people regardless of the ability to pay. Labour was building on a series of welfare reforms going back at least to the Liberals' reforms of 1902-12. This provision of old age pensions, national insurance and other benefits had been steadily expanded by coalition, Conservative and Labour governments during the inter-war period. Britain was already a 'welfare society', if an incomplete one, before 1939. The experiences of the war generated a strong sense of community in Britain and persuaded people of all classes of the need for reform through collective action. There was widespread support for the idea that, having won the war, Britain would have to 'win the peace' by making a fairer society and ensuring that there was no return to the dark days of the 1930s. The war had already prompted increased welfare provision. Fears of mass aerial bombing led to the creation of the Emergency Medical Service which was a kind of national hospital service. The mass evacuation of children revealed the extent of deprivation amongst children. From 1942 onwards there was public support for Beveridge's ideas on social insurance 'from the cradle to the grave'. ...read more.

The author make some convincing evaluative points but their coverage is uneven; arguably the most important reform, the NHS, is barely discussed and the essay lacks a conclusion. 3 out of 5 stars.