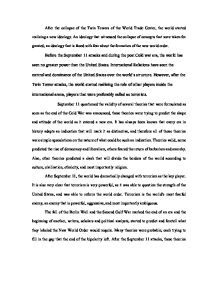 After the collapse of the Twin Towers of the World Trade Center, the world started realizing a new ideology.

After the collapse of the Twin Towers of the World Trade Center, the world started realizing a new ideology. An ideology that witnessed the collapse of concepts that were taken for granted; an ideology that is faced with fear about the formation of the new world order. Before the September 11 attacks and during the post Cold war era, the world has seen no greater power than the United States. International Relations have seen the control and dominance of the United States over the world's structure. However, after the Twin Tower attacks, the world started realizing the role of other players inside the international arena, players that were preferably called as terrorists. September 11 questioned the validity of several theories that were formulated as soon as the end of the Cold War was announced, these theories were trying to predict the shape and attitude of the world as it entered a new era. It has always been known that every era in history adapts an indication that will mark it as distinctive, and therefore all of those theories were simple speculations on the nature of what could be such an indication. Theories valid, some predicted the rise of democracy and liberalism, others feared the return of barbarism and anarchy. Also, other theories predicted a clash that will divide the borders of the world according to culture, civilization, ethnicity, and most importantly religion. After September 11, the world has dramatically changed with terrorism as the key player. It is also very clear that terrorism is very powerful, as it was able to question the strength of the United States, and was able to reform the world order. Terrorism is the world's most fearful enemy, an enemy that is powerful, aggressive, and most importantly ambiguous. The fall of the Berlin Wall and the Second Gulf War marked the end of an era and the beginning of another, writers, scholars and political analysts, started to predict and foretell what they labeled the New World Order would require. ...read more.

present a report about terrorism concluding that it is the most dangerous form of "Asymmetric Warfare", and like Hughes, specialists also anticipated that terrorism will stand as the major global crime. In this report it was anticipated that the greatest danger that will face the international community is terrorism, which was not very new itself, yet what was very insightful is the conclusion that in the future it will take a new form for several reasons.25 First of all, according to the report, terrorism is no longer about an individual or a group of people who have secretly agreed to assassinate someone for vengeance or even for political reasons.26 Also it is no longer about groups who belong to certain Leftist or Rightist ideologies. As Heikal argues terrorism has transformed and adopted itself to the modern time and it now involves groups who are stretching all over the world, including elements who are fighting for a cause, or people who are suffering from poverty, social inequality or injustice and terrorism is simply the channel through which all these different elements express their suffering.27 This observation of course is very close to our earlier reference to "Non-Systemic Forces" and to Barber' idea of "Jihad" linking all three ideas by explaining how terrorism can be utilized by forces outside of the international system or marginalized by it in order to attack it as hard as possible. These thoughts or motivations of 'terrorist groups' are not the only features of terrorism that have changed or adapted to the modern or post-modern era, but also their methods. Technology has reached the terrorism arena, giving it strength and enabling it to reach places it previously could not reach.28 Not only this, but since globalization is the symptom of the new century, terrorism has also taken advantage of it. The globalization factor, as Heikal puts it has made world markets become very close to being like "spider nets", very interconnected, inter-related and endless29, which could help terrorists cause severer damages. ...read more.