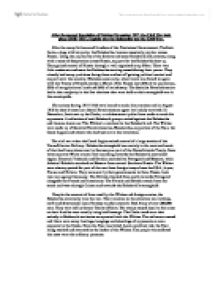 After the second Revolution of October/November 1917, the Civil War took place (1918)-1921). Explain why the Bolsheviks won the Civil War.

After the second Revolution of October/November 1917, the Civil War took place (1918)-1921). Explain why the Bolsheviks won the Civil War. After the many failures and blunders of the Provisional Government, Vladimir Lenin, along with his party, the Bolsheviks, became massively popular across Russia. Using the popularity of the Soviets and some Bolshevik-led protests, along with a sense of desperation across Russia, support for the Bolsheviks shot up. They gained control of Russia through a well organised coup d'�tat. There was little resistance and soon the Bolsheviks starting consolidating their power. They already had many problems facing them and set off gaining political control and support over the country. Mistakes came early, when Lenin was forced to agree with the Treaty of Brest-Litovsk in March 1918. Russia lost 34% of its population, 32% of its agricultural land and 54% of its industry. The Socialist Revolutionaries had a clear majority in the free elections that were held as their stronghold was in the countryside. ...read more.

They were led by former Tsarist officers. The troops stayed loyal to the cause as their families were usually being held hostage. The Cheka made sure that nobody in Bolshevik territories co-operated with the Whites. The red terror ensued and there were many beatings, hangings and shootings of opponents or even suspects by the Cheka. Even the Tsar was killed. Lenin could not risk the Tsar being rescued and returned as the leader of the Whites. The people who suffered the most were the ordinary peasants. The war ensued for a further 2 years. The Whites had gained a major advantage over the Bolsheviks in strength and in timing. They had also gained major support in the west. Despite the Cheka's forceful resistance, the Whites were still the clear favourites. However, as the war progressed, the favour seemed to tilt toward the Bolsheviks through harsh discipline and brilliant leadership by Leon Trotsky. By the end of 1919 Admiral Kolchak's forces were destroyed and the armies of intervention soon withdrew. ...read more.

This meant they were widely spread across the country and were unable to carefully and precisely coordinate their campaign. This meant that Trotsky was easily able to crush them one by one. The Bolsheviks had faced their first large threat of power in Russia. Their reaction and destruction of the Whites proved to the public and historians today of the party's brilliant leadership and overall effectiveness, an underlying reason to why Lenin's values and ideas had been upheld for so long. The strengths of the Bolsheviks that enabled them to comeback from the onset of defeat were admirable. There was of course an element of luck, and the Bolsheviks were lucky that the Whites were faced with such disadvantages such as their poor organisation and failure to enlist support. In the end however, it was the ordinary people who suffered in the war. Both sides committed terrible atrocities and the peasants were the most hardly hit. Still, the Civil War was over and the Bolsheviks retained control, this time they focused mainly of the economical growth of Russia. ...read more.