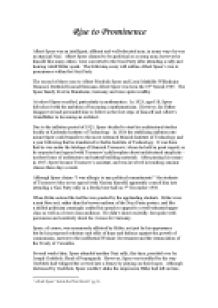 Albert Speers Role as German Armaments Minister during the War

﻿Rise to Prominence Albert Speer was an intelligent, affluent and well-educated man, in many ways he was an atypical n**i. Albert Speer claimed to be apolitical as a young man; however he himself like many others, were converted to the n**i Party after attending a rally and hearing Adolf Hitler speak. The following essay will outline Albert Speer?s rise to prominence within the n**i Party. The second of three sons to Albert Friedrich Speer and Lusie Mathilde Wilhelmine Hommel, Berthold Konrad Hermann Albert Speer was born the 19th March 1905. The Speer family lived in Mannheim, Germany and were quite wealthy. At school Speer excelled, particularly in mathematics. In 1923, aged 18, Speer left school with the ambition of becoming a mathematician. However, his Father disapproved and persuaded him to follow in the foot steps of himself and Albert?s Grandfather in becoming an architect. Due to the inflation period of 1923, Speer decided to start his architectural studies locally at Karlsruhe Institute of Technology. In 1924 the stabilizing inflation rate meant Speer could transfer to the more esteemed Munich Institute of Technology and a year following that he transferred to Berlin Institute of Technology. It was there that he was under the tutelage of Heinrich Tessenow, whom he held in great regard, as he respected and agreed with Tessenow?s philosophies about architectural simplicity ? modest forms of architecture and natural building materials. After passing his exams in 1927, Speer became Tessenow?s assistant, and was involved in teaching seminar classes three days a week. Although Speer claims ?I was allergic to any political commitments?[1] the students of Tessenow (who never agreed with Nazism himself) apparently coaxed him into attending a n**i Party rally in a Berlin beer-hall on 5th December 1930. When Hitler entered the hall he was greeted by the applauding students. Hitler wore a neat blue suit, rather than the brown uniform of the n**i Party posters, and like a skilled politician cunningly crafted his speech to appeal to a well-educated upper class as well as a lower class audience. ...read more.

A committee was in place for each of the productions, and Speer made it a policy that technically capable young men were appointed to leadership positions so as to bring about new ideas for the industrial production. The Zentrale Planung (Central Planning Board) was also established by Speer, to coordinate armament production for the Army, Navy and Airforce. This concept was to help cut down costs, unnecessary loss of time, raw materials and duplication of effort. Speer was able to bring a practical understanding of what was needed by the forces, when he visited the German soldiers fighting in the south of Russia and Lapland and being able to assess its adequacy and efficiency. Within the first six months of Speer being in charge of the armaments production, results were increased markedly. With 27% increase in gun production, 25% increase in tank production and 97% increase in ammunition production, the armament production rate continued to rise over the following year and a half. During Speer?s reign as Armaments Minister, his success was only hindered by Hitler?s position as Commander-in-Chief of the Army as Hitler constantly overruled Speer on many major aspects of the armaments industry. When meeting with Hitler to discuss new ideas, Speer always took an entourage of technical experts and specialists. However, sometimes Hitler, although not knowing the situation on the fronts, overruled development plans such as the Panther Tank and the ME-262 fighter plane, which could have been successful. Another problem Speer had was, Hitler?s interest in ?miracle weapons?. Speer claims that throughout the war, the Germans were working on and developing, rocket planes, rocket missiles, sound- seeking torpedoes, the atomic b**b, remote-controlled missiles and ground-to-air defence missiles. However, the lack of concentrating on just one or two projects at a time caused none of them to develop and failure in the production of any ?miracle weapon?. As the end of the war was drawing closer and the need for more soldiers came about, Speer needed more people working in the industry and so pushed to mobilise German women into the workforce. ...read more.