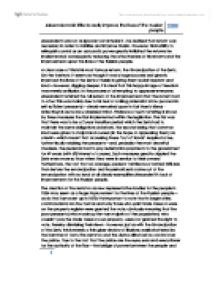 Alexander II was not as ignorant as Nicholas II - he realised that reform was necessary in order to stabilise and improve Russia. However, his inability to relinquish control as an autocratic power greatly inhibited the reforms he implemented; consequently reducing the effectiveness of his reforms and the improvements upon the lives of the Russian people. A clear case of this is his most famous reform, the Emancipation of the Serfs. On the forefront, it seems as though it was a huge success and greatly improved the lives of the Serfs of Russia in giving them social freedom and land - however, digging deeper, it is clear that this happy image of freedom was merely an illusion. In the process of attempting to appease everyone, Alexander II forfeited the full extent of the improvements that the reform had to offer. This was mainly due to his fear of a rising proletariat state (economic self-sufficient peasants) - clearly remarked upon in Karl Marx's ideas - reflecting his autocracy obsessed mind. Evidence of such forfeiting is shown by three measures the Tsar implemented within the legislation. The first was that there was to be a 2 year transition period which the Serfs had to maintain the same obligations as before, the second being that common land were given to major land-owners (in the hope of appeasing them) ...read more.

grant further reforms, however, if he maintained himself throughout his reign and truly believed in his reforms, then he would have surely been able to deal with a little attempted assassination and ploughed forward. This does not change the fact that the Tsar proved to be lacking in motions towards improvements for the Russian people - his hesitance further confuses the Russian people, as they do not know what side they should be siding with. The conservative Mir were not dealt with which meant that unelected, inefficient old drones were still being appointed heads of peasant villages. This severely decreased the amount of reforms and improvements that took place, due to the fact that the Mir was conservative, therefore disliking reforms. This leads splendidly onto the problem of land, which neither the Mir nor the Tsar touched. The issue with land was that of the distribution. Many Russian families struggled to feed themselves - which can also link in with the Emancipation of the Serfs in that the Serfs had 20% less land than before the Emancipation. The Tsar could have solved these two issues - the Mir and the issue of land - quite easily - well with the Mir at least. However, he let these two issues lie, which did not help the Russian people in any way whatsoever. ...read more.

The notoriously inefficient finance system - or lack of one - was ignored and was not improved at all. Another stricken note upon which the Tsar did not tune. The economy was developing and showed some improvements. By 1887, the workforce expanded from 860,000 to about 1,320,000 and oil and coal extraction increased dramatically within the two decades or so. However, in comparison to the West, these improvements were mere peanuts and bore no real challenge. In regards to the Russian people, the working class were still less than 1%, meaning that a vast majority were still unemployed, starving and probably dying. Alexander II's lack of help here clearly shows his inability to want to reform and help reform. Alexander, although recognised that reform was needed for Russia to move forward, was heavily influenced by autocracy - probably a consequence of being tutored by the moody, Russian-loving, conservative Pobedonestev - consequently, his reforms were weak and lacked follow through. This actually confused and irritated the Russian people more than they improved their lives at all. In a way, I even breathe a sigh of relief to have such a confusing "liberalist" out of Russia's way, for to have someone of his nature on the throne would have led to dangerously temperamental actions. ?? ?? ?? ?? Alexander II did little to really improve the lives of the Russian people 2008 1 ...read more.