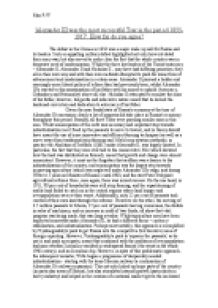 ﻿Max P-W 'Alexander III was the most successful Tsar in the period 1855-1917'. How far do you agree? The defeat in the Crimea in 1856 was a major wake up call for Russia and its leaders. Such an appalling military defeat highlighted not only how out-dated their army was, but also served to make clear the fact that the whole country was in desperate need of modernisation. Whilst the three last leaders of the Tsarist autocracy ? Alexander II, Alexander II and Nicholas II - may have had differing priorities, they all in their own way and with their own methods attempted to push for some form of advancement and modernisation in certain areas. Alexander II pursued a bolder and seemingly more liberal policy of reform than had previously been, whilst Alexander III's reacted to this assassination of his father with his aimed to uphold 'Autocracy, Orthodoxy and Nationality' above all else. Nicholas II attempted to emulate the aims of his father; however, his gentle and indecisive nature meant that he lacked the hardened conviction and dedication to autocracy of his father. Given the near feudal state of Russia's economy at the time of Alexander II's ascension clearly a lot of progress did take place in Russia's economy throughout this period. Broadly, all three Tsars were pursuing similar aims in this area. ...read more.

In contrast, the 1904 Russo-Japanese war (which ultimately proved the catalyst for the 1905 revolution), and Russia's defeat, could be seen as evidence to suggest that perhaps the reforms under Alexander II were not as successful as they first seemed. However, ultimately defeat was largely due to the fact the Nicholas II had never anticipated a war (or the surprise attack at Port Arthur), and that he and the military greatly underestimated Japan and its army as that of a relatively weak emerging power. In fact the military regime that was in control of Japan, meant it was highly efficient and focused on total war, especially when compared to the thinly spread, disorganised, and unprepared troops of the Russian army. Moreover, the fact that next to nothing had been done since Milyutin's reforms to keep the army up to date and abreast of any technological advancements, or any administrative or structural innovation, only compounded the issues. This absence of any maintenance is down not only to Nicholas II however, but also to Alexander III, who was more concerned with consolidating the authority of the autocracy and the newly formed secret police, the Okrana (formerly the Third Section), and defending against interior threats, as opposed to exterior ones. In spite of the humiliating defeat to Japan, and perhaps because of other events (such as the 1905 revolution) ...read more.

As Alexander III was the only Tsar of the three who made the government conform to his wishes in terms of its nature, he must be taken as most successful in this area. Looking broadly at the period, a great deal of progress was made. However, this is not as important in the appraisal of the most successful Tsar, as to what extent they achieved their aims. As such, in spite of the fact that the greatest improvement in the lives of the population as a whole took place under Nicholas II, the fact that often these developments ran against his aims, and were often not completely in his control, highlights his weakness as a leader. Conversely, Alexander II made huge steps towards achieving his aim of modernisation, and whilst there were teething problems, much of the later progress could not have been achieved without the work he did; however, this ultimately clashed with his aim of preserving the superiority of the Aristocracy - something he could not allow. Alexander III's reign on the other hand, showed no such waver at any point in his reign. Whilst he may not have kept the army up to date, his focus was primarily domestic ('autocracy, orthodoxy, nationality'), and he had no aim to expand, or greatly boost Russia's military prowess. Alexander III was indeed the most sucessful Tsar of this period, primarly because he used the Tsarist autocracy to do what it did best ? maintain the nobility, quash any opposition and promote traditional, right wing values. ...read more.