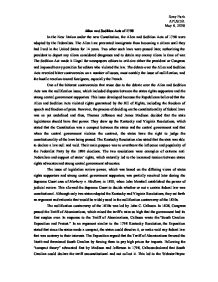 Alien and Sedition Acts of 1798

Alien and Sedition Acts of 1798 In the New Nation under the new Constitution, the Alien and Sedition Acts of 1798 were adopted by the Federalists. The Alien Law prevented immigrants from becoming a citizen until they had lived in the United States for 14 years. Two other such laws were passed later, authorizing the president to deport any aliens considered dangerous and to detain any enemy aliens in time of war. The Sedition Act made it illegal for newspapers editors to criticize either the president or Congress and imposed heavy penalties for editors who violated the law. The debate over the Alien and Sedition Acts revealed bitter controversies on a number of issues, most notably the issue of nullification, and the hostile reaction toward foreigners, especially the French. One of the bitterest controversies that arose due to the debate over the Alien and Sedition Acts was the nullification issue, which included disputes between the states rights supporters and the strong central government supporters. ...read more.

Madison, in 1803, when John Marshall established the power of judicial review. This allowed the Supreme Court to decide whether or not a certain federal law was constitutional. Although only two states adopted the Kentucky and Virginia Resolutions, they set forth an argument and rationale that would be widely used in the nullification controversy of the 1830s. The nullification controversy of the 1830s was led by John C. Calhoun. In 1828, Congress passed the Tariff of Abominations, which raised the tariff's rates so high that the government had its first surplus ever. In response to the Tariff of Abominations, Calhoun wrote the "South Carolina Exposition and Protest." In an argument similar to the 1798 Kentucky Resolution, the Exposition stated that since the states made a compact, the states could dissolve it, or make void any federal law that was contrary to their interests. The Exposition argued that the Tariff of Abominations favored the North and threatened South Carolina by forcing them to pay high prices for imports. ...read more.

In 1793, President Washington decided that US wasn't strong enough to engage in a European clash, and thus, he issued a proclamation of US neutrality in the conflict. However, objecting to Washington's policy, Citizen Gen�t, the French minister to the US, broke rules of diplomacy by appealing directly to the American people to support the French cause. So outrageous was his conduct that even Jefferson, a sympathizer with the revolutionary cause, agreed that the offending French diplomat should be removed. The growing anti-French feeling was further stimulated due to the XYZ Affair of 1798. Americans were angered by the seizure of US merchant ships by French warships and privateers. Seeking a peaceful settlement, Adams sent a delegation to Paris to negotiate with the French government. When they were solicited for a bribe by three subordinates of the French Minister Talleyrand, they indignantly refused, and their report of this produced outrage at home. The cry "millions for defense, but not one cent for tribute" was raised, and public feelings against the French ran high. The adoption of the Alien and Sedition Acts reflected this anti-foreign sentiment at home. ?? ?? ?? ?? Suzy Park APUSH/A May 6, 2009 ...read more.