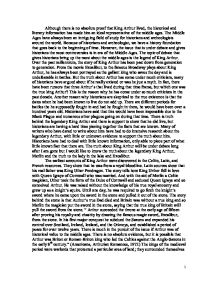 Although there is no absolute proof that King Arthur lived, the historical and literary information has made him an ideal representative of the middle ages.

Although there is no absolute proof that King Arthur lived, the historical and literary information has made him an ideal representative of the middle ages. The Middle Ages have always been an intriguing field of study for historians and archeologists around the world. Because of historians and archeologist, we have a history foundation that goes back to the beginning of time. However, the issue that is under debate and gives historians the most controversies is in era of the Middle Ages. The topic of debate that gives historians bring up the most about the middle ages is the legend of King Arthur. Over the past millennium, the story of King Arthur has been past down from generation to generation. From the movie Excalibur, to the famous Broadway plays about King Arthur, he has always been portrayed as the gallant king who saves the day and is undefeatable in battles. But the truth about Arthur has come under much criticism, many of historians have argued about if he really existed or was he just a myth. In fact, there have been rumors that three Arthur's that lived during that time frame, but which one was the true king Arthur? This is the reason why he has come under so much criticism in the past decade. Another reason why historians are skeptical to the true existence is that the dates when he had been known to live do not add up. ...read more.

Rejecting their offer, he set sail to confront the Roman forces, leaving his son Mordred as vice regent. After conquering the Romans, Arthur heard of news that Mordred had an uprising and his goal was to over through King Arthur. Arthur returned to Camelot where a bitter battle was fought between the rebels and the loyal subjects. The king killed Mordred, but was severely wounded himself. He was carried away secretly to the secret aisle of Avalon, the Celtic Mythology island of the blessed souls, to be healed of his wounds. Arthur returned to Camelot, but legend says he will someday come back to rule over England again. Merlin first appears in the Middle ages as a mere prophet, but his role gradually evolved into that of a magician and advisor, active in all phases of the administration of Arthur's kingdom. He was apparently given the name Ambrosias at his birth in Caer-Fy Riddin (Carmorthen). He later became known as Merlin a Latinized version of the Welsh word Myrddin, taken from the place of his birth. Geoffrey of Monmouth was thought to have invented the name Merlin, most likely because he invented everything else in his stories. Merlin's was the illegitimate son of the royal princess of Dyfed. His father was Kind Meurig, who was not found in the traditional pedigrees of the kingdom and was more than likely a sub-king of the region of Coredigion. ...read more.

In a central and commanding position on the high part of the hill called Arthur's Palace, the foundation of a timber hall came to light. It was 63ft. by 34ft. Their walls were marked by postholes cut in the bedrock. In outline, it resembled the hall of Castle Dore, but there were grounds for inferring more skillful workmanship quality rather than size. In this building the chief warriors would have assembled, feasted, listened to minstrels, planned campaigns, most important of all was the discovery which was made in the bank. The three quarter mile perimeter of the hill, cuts through it in several places, now refilled like the entrance, revealed across section like layer cake, with strata one above another showing how the ram art had been rebuilt at various times over the centuries. The defensive system surrounding the hill made an impression in keeping with the period. The wall itself, with its timber bracing and super structure, was very like what the British Celts were building before the Roman Conquest. It incorporated fragments of Roman masonary, salvaged from derelict buildings but it was strictly a national piece of work. The truth about the real King Arthur, is an issue that will be around until the truth is revealed about him. Historian and archeologist have debated this issue for over a millennium with no were getting to the truth about him. They have found that he did exist, but will they ever come to the agreement about him. For know we will have to live with folklore to the existence of the true King Arthur. ` 1 1 ...read more.