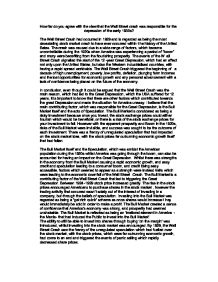 How far do you agree with the view that the Wall Street crash was responsible for the depression of the early 1930s? The Wall Street Crash had occurred in 1929 and is regarded as being the most devastating stock market crash to have ever occurred within the history of the United Sates. The crash was caused due to a wide range of factors, which became uncontrollable during the 1920s when America was experiencing a period of "boom" and many were benefiting from the flourishing prosperity. The events of the Wall Street Crash signalled the start of the 12-year Great Depression, which had an affect not only upon the United States, but also the Western Industrialised countries, with having a rapid spread worldwide. The Wall Street Crash triggered the beginning of a decade of high unemployment, poverty, low profits, deflation, plunging farm incomes and the lost opportunities for economic growth and any personal advancement with a lack of confidence being placed on the future of the economy. In conclusion, even though it could be argued that the Wall Street Crash was the main reason, which had led to the Great Depression, which the USA suffered for 12 years, it is important to know that there are other factors which contributed towards the great Depression and made the situation for America uneasy. ...read more.

The ability to still be able to invest into shares through buying 'on the margin' was introduced, whilst investing into the stock market was encouraged. By 1929, the Wall Street Crash saw the frenzy of the unregulated speculation which had fuelled over the stock market, with the stock prices, which were far outrunning economic growth, had come to an end and triggered the events of panic selling which rapidly decreased share prices. Whilst the Bull Market and Speculation that was a mania during the 1920s led to the Wall Street Crash, further enforcing the Great Depression, the weaknesses in the business and the banking system also account towards playing a role for the depression of the 1930s. The government had pursued the policies of laissez fair, which was favourable for the big businesses, and made it so that the power status of the central banking system was limited. There was only 3 principal ways in which the Federal Reserve Board would be able to intervene with the Stock Market; Sale of government securities, raising interest rates and moral leadership. Another contributing factor, which accounts for the Great Depression is the Problems faced in Europe, with the outstanding debt payments. During World War One, American had lent out money to European countries to help finance for the War, in hope that it would be repaid at a shorter period of time. ...read more.

The introduction of policies such as High Tariffs were introduced in thought of strengthening the American Economy, as the Fordney McCumber Act of 1922, places tariffs on foreign imported goods, therefore meaning that goods were cheaper to buy for Americans. However whilst roaming with the thought that the High Tariffs act was provided beneficial for the American Economy, it concluded to have its weaknesses in the economy. The high tariffs act had placed affects on some certain industries, which were instead ceased to grow, or in some cases some became out of business. In addition whilst the high tariffs were placed on food imports, foreign countries retaliated by introducing similar tariffs on American food, therefore meaning that high tariffs made it difficult to allow farmers to export their surpluses. The government policy of few regulations meant that a business would be able to continue to run as it saw was best to do so, so therefore laws such as fixed pricing was instead ignored, and if the government chose to get involved, they would be unable to do so effectively as the business would win in an appeal. This contributes towards the Government policies that hindered the Great Depression due to the lack of organisation that was involved within businesses. Tax reductions meant that there was less money going into the government from people, however the Tax reductions were only effective towards the wealthy classes, unlike to the people who were too poor to have paid taxes in the first place. ...read more.