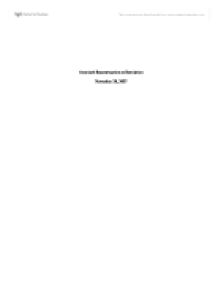 America's Reconstruction as Revolution November 28, 2007 There are many reasons one may describe the Reconstruction era as America's unfinished revolution. It was a time that promised great change and progress, not only in the Southern United States, but across the entire country, and many of these changes were realized, if only for a short time. But it is not sensible to assume that the age after the progress had been reverted was the same as the antebellum South or even of the South before Reconstruction began. Though the Republican reformations did not stick, the South, and America, after Reconstruction was a new place. It operated on different systems with different ideals. A logical place to view as the beginning of Reconstruction is the first of January, 1863. This is the day that President Abraham Lincoln signed the Emancipation Proclamation. Lincoln was able to make such a declaration because the nation was at war, and as Commander-in-Chief of the Army and Navy, he could make military orders. Because of the logistics of the position, Lincoln could not free all slaves. He could only free slaves in the areas that had seceded from the union and taken military action against the United States. This included the ten states of the Confederacy that were not under Union control. Emancipation did not apply to slaves in Maryland, Missouri, Delaware, and Kentucky, as they were slave-holding states that never seceded from the union. The slaves of Tennessee also remained in bondage as the Union Army had already taken control of the state by January 1, 1863. Slaves were overjoyed upon hearing upon hearing the proclamation. They gathered in celebrations across the country. But January 1 was not the first day that slaves took a hold of freedom. From the beginning of the war many slaves understood that emancipation would undoubtedly be achieved, and they acted to that extent. ...read more.

white race.'"9 The Republican Congress, now unified against Johnson, had enough votes to override the veto and put the act into law. As for Johnson, he had pushed even more of congress away and further to the left. His actions would usher in a period dominated by the Reconstruction policies of the Radical Republicans. The period after the rise of the Radical Republicans encompassed the most progressive changes in the whole of Reconstruction. The two most prominent leaders of the radicals were Thaddeus Stevens in the House of Representatives and Charles Sumner in the senate. Along with others, these men aggressively pushed their political agenda into the public realm. Economically, they wanted to reform Southern agriculture to more resemble the free labor system in the North. This consisted of dividing up large plantations into smaller farms that could be managed by families without a large force of laborers. They believed that these smaller farms would increase competition and spur economic growth. Also, they believed this system would bring industrial interests to the area, such as factories and railroads. Thaddeus Stevens considered that confiscation of the large landowner's lands was the way to achieve this system. He believed it "would break the power of the South's traditional ruling class, transform the Southern social structure, and create a triumphant Southern Republican party composed of black and white yeomen and Northern purchasers of planter land."10 Though not all the Republicans were ready to go as far as Stevens proposed, they agreed that blacks must be guaranteed an equal standing in both economics and politics. The Fourteenth Amendment was an effort to provide this equality while, at the same time, not impose total suffrage on the individual states, which many viewed as overstepping of federal power. The three clauses attempted to achieve the goal in an astute manner. The first clause stated that all laws must apply equally to both blacks and whites. ...read more.

There have been many popular historical writings about Reconstruction since it ended with many varying points of view. From the early 1900s to the 1960s the widely accepted study of the Reconstruction was William Dunning's. He and his followers in the "Dunning School" believed that the greatest mistake in the Reconstruction was giving blacks the right to vote and that the failure of the Reconstruction rested with the radical Republicans. During this time period there were several dissenting opinions by self proclaimed revisionist historians such as C. Vann Woodward who stressed that there were more complicated economic factors that led to the outcome of Reconstruction. From the 1960's onward, the focus of Reconstruction has been on that of the black experience. Eric Foner is the most prominent and accepted historian of this group and in the current field. Even though the end of Reconstruction brought back many of the elements that it fought to prevent, not all was lost. There were many lasting changes that occurred during and due to Reconstruction. For the first time in national history, the responsibility for public education was placed in the hands of the state. This was an important step to education reform and modernization. Another lasting effect was the disruption of the planter dominated economic system of the South. No longer was a plantation owner guaranteed success and wealth and they no longer had powerful influence in Washington. In the black community, the Reconstruction brought into existence a whole new class structure that was not present before. Though it developed slowly, it was an entirely new element brought about by Reconstruction. But the most important lasting effect of Reconstruction, in terms of national history, would have to be the vast expansion in national authority. Never before had the interest of the federal government superseded the interest of the state governments on such a scale. The turmoil of the Reconstruction allowed for a national precedent to be set. It is wholly apparent by looking at the power of the federal government at this present time that this change and long-lasting and powerful effects. ...read more.