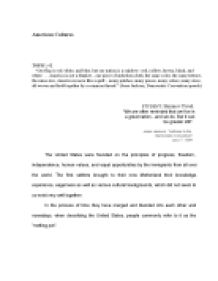 ﻿American Cultures TOPIC: #2 ?Our flag is red, white, and blue, but our nation is a rainbow ?red, yellow, brown, black, and white- ? America is not a blanket ? one piece of unbroken cloth, the same color, the same texture, the same size, America is more like a quilt ? many patches, many pieces, many colors, many sizes, all woven and held together by a common thread.? (Jesse Jackson, Democratic Convention speech) STUDENT: Baranov Pavel. ?We are often reminded that we live in a great nation - and we do. But it can be greater still?. Jesse Jackson, "Address to the Democratic Convention" July 17, 1984 The United States were founded on the principles of progress, freedom, independence, human values, and equal opportunities by the immigrants from all over the world. The first settlers brought to their new Motherland their knowledge, experience, eagerness as well as various cultural backgrounds, which did not seem to co-exist very well together. In the process of time they have merged and blended into each other and nowadays, when describing the United States, people commonly refer to it as the "melting pot". Hector St. John de Crevecoeur said, ?In America?individuals of all nations are melted into a new race of men. The creation of the U.S.?was not to preserve old cultures but to forge a new, American culture." Is this still true or the United States has changed from a ?melting pot? to a vast culture with varying racial backgrounds? ...read more.

Seen in the movie, ?A Family Gathering?, Lisa Yasui exemplifies no matter how hard her grandfather tried to assimilate into this American culture he still was different, he was Japanese and in the end his struggle took a toll on his mental status and life. This event proves, regardless of its true meaning, the American myth?s promises of openness, harmony, unity, and equality were deceptive from the beginning. The book Immigrant Voices by Thomas Dublin gives numerous examples of problems experienced by the immigrant families of Rose Gollup, Mary Paik, Ernesto Galarza, etc., who were trying to assimilate to the realities of their new life in America. ?America is not like a blanket - one piece of unbroken cloth, the same color, the same texture, the same size. America is more like a quilt - many patches, many pieces, many colors, many sizes, all woven and held together by a common thread. The white, the Hispanic, the black, the Arab, the Jew, the woman, the native American, the small farmer, the businessperson, the environmentalist, the peace activist, the young, the old, the lesbian, the gay and the disabled make up the American quilt? (Jackson). The truth is that the differences and conflicts are still very real and very strong. The only difference is that in today?s America they have gone from the forefront of society to hiding under the surface of societies? consciousness. ...read more.

I came to the USA only 20 months ago. It is not that easy for me to fully assess the complexity of cultural problems in the USA. However, I understand that one must always remember that with the start of a new life here in America he or she is bound to encounter various obstacles on the way. The way we cope with them is going to determine our future. Should we oppose the current American values and retain our own or should we become a part of the ?melting pot?? Coming from a different cultural background, I am sure that one would not be able to set it all aside easily. That is why it is important to retain your own cultural values and try to blend them in with the current American values. Immigrants with different cultural values formed America. Hence, in the current cultural and moral values of America, I am sure that I can find some aspects relating to my own culture. Common moral values are shared by all cultures. That is why I respect Jesse Jackson for speaking freely and openly about the problems that America is facing. Moreover, he is not afraid of them; he is not trying to escape from them. Mr. Jackson is looking for solutions to resolve the problems and is trying to do it through the use of the common human values that are embedded in any culture. I?m far from giving advices to the Americans but, in my opinion, this is the only way one can succeed in a country like the United States. ...read more.