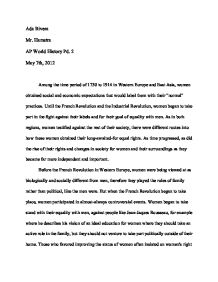 Among the time period of 1750 to 1914 in Western Europe and East Asia, women obtained social and economic expectations that would label them with their &quot;normal&quot; practices.

Ada Rivera Mr. Hamstra AP World History Pd. 2 May 7th, 2012 Among the time period of 1750 to 1914 in Western Europe and East Asia, women obtained social and economic expectations that would label them with their "normal" practices. Until the French Revolution and the Industrial Revolution, women began to take part in the fight against their labels and for their goal of equality with men. As in both regions, women testified against the rest of their society, there were different routes into how these women obtained their long-awaited-for equal rights. As time progressed, as did the rise of their rights and changes in society for women and their surroundings as they became far more independent and important. Before the French Revolution in Western Europe, women were being viewed at as biologically and socially different from men, therefore they played the roles of family rather than political, like the men were. But when the French Revolution began to take place, women participated in almost-always controversial events. ...read more.

The working class women would work for a living while single and were expected to keep on working until married, in such places like domestic service but were not equal to men's jobs at the time. For the mid 19th century, more forms of employment became available to women and girl's education began to be taken more seriously. There were more schools for girls offering an academic education with boys and with the expansion of education, it offered more job opportunities for teachers. Technological inventions also lead to occupation expansion, as the invention of the typewriter supported to a larger range of jobs for women in offices. In the early 20th century, some women became active in the women's suffrage movement, testifying for votes from the women. Western European rights an women progressed with their equality as time progressed. In East Asia, situations for women were likewise. Asian women were also expected to play an active role in the household. Although communism was not official until 1949, the revolution of communism started in women were finally being considered equal to men. ...read more.

Although they were lawfully allowed to work in workplaces, some, yet most men, did not believe women should be working anywhere other than in the house. Women in Western Europe and East Asia did have similar factors leading to their goals, but women in Western Europe did not acquire "normal" social practices where the Asian women were expected of. In both Western Europe and East Asia, the upper class women were not expected to become housewives and most obtained an academic education because they did not have to worry about taking care of the household. Finally by the early 1900's, women earned what they deserved. At the beginning of the twentieth century, women not only obtained the right to workplace but also the right to vote. As these women earned their rights, the rest of the world progressively began to follow along with the act of fighting for women equalities. Women not only fought physically for the past two centuries, but also emotionally, as they dealt with the remarks from those who opposed from the ideas. Nationalists in East Asia called for the end of acts, such as footbinding and arranged marriages, as with the equality factors led to Communism in 1949. ...read more.