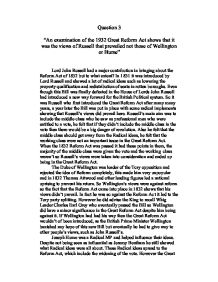 &quot;An examination of the 1932 Great Reform Act shows that it was the views of Russell that prevailed not those of Wellington or Hume&quot;

Question 3 "An examination of the 1932 Great Reform Act shows that it was the views of Russell that prevailed not those of Wellington or Hume" Lord John Russell had a major contribution in bringing about the Reform Act of 1832 but to what extent? In 1831 it was introduced by Lord Russell and showed a lot of radical ideas such as lowering the property qualification and redistribution of seats in rotten boroughs. Even though this Bill was finally defeated in the House of Lords John Russell had introduced a new way forward for the British Political system. So it was Russell who first introduced the Great Reform Act after many many years, a year later the Bill was put in place with some radical implements showing that Russell's views did prevail here. ...read more.

The Duke of Wellington was leader of the Tory opposition and rejected the idea of Reform completely, this made him very unpopular and in 1832 Thomas Attwood and other leading figures led a national uprising to prevent his return. So Wellington's views were against reform so the fact that the Reform Act came into place in 1832 shows that his views didn't prevail. In fact he was so against the Reform Act it led to the Tory party splitting. However he did advise the King to recall Whig Leader Charles Earl Grey who eventually passed the Bill so Wellington did have a minor significance in the Great Reform Act despite him being against it. ...read more.

As Paine led way to 2 Revolutions perhaps Hume was considering planning an uprising but as he didn't his views didn't prevail. The Great Reform Act was not a sign of democracy, which Radicals such as Joseph Hume wanted so he had only a little impact as many of the Radical ideas weren't considered and Hume did play second fiddle to Bentham. Liberty, equality and fraternity, the Radical motto were not part of the 1832 Great Reform Act. So in conclusion it would appear that Lord John Russell's views did prevail as the Great Reform Act was passed eventually in 1832 despite Wellington's efforts to stop it. Also the Radical Joseph Hume would have been disappointed with the Bill, as it didn't include many Radical ideas showing that Lord John Russell was the most influential in the Great Reform Act. ...read more.