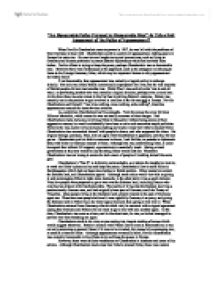 "An Honourable Policy Pursued by Honourable Men"-Is This a Fair Assessment of the Policy of Appeasement? When Neville Chamberlain came to power in 1937, he was left with the problems of n**i Germany to deal with. Chamberlain stuck to a policy of appeasement, making peace in Europe his main aim. He went to new lengths to try and prevent war, such as flying to Germany and discuss problems in person (shuttle diplomacy) which had not been done before. For his efforts in trying to keep the peace, perhaps Chamberlain was an honourable man. However there were weaknesses to his approach, such as his arrogance in refusing to listen to his Foreign Secretary Eden, which may be important factors to why appeasement inevitably failed. If not honourable, then appeasement was certainly a logical policy to undergo initially. Not only was Great Britain economically unprepared for a war, but the vast majority of British people did not want another war. World War I was said to be the 'war to end all wars', so preventing another war was certainly a logical decision, perhaps even a moral one. At this time there was also unrest in the Far East involving Britain's colonies. Britain was certainly not in the position to get involved in conflicts in the far east and in Europe. Neville Chamberlain said himself; "war wins nothing, cures nothing, ends nothing", therefore appeasement seemed the most obvious solution. As a politician Chamberlain had his strengths. ...read more.

By equality Hitler probably meant scrapping all the terms of the Treaty of Versailles. This response shows that Hitler was not interested in peace, but fighting for what he wanted, which should have shown Chamberlain he was not interested in appeasement. Maybe this should have made Chamberlain realise that appeasement was a weak policy where Hitler was concerned. Perhaps the most alarming indication that Hitler was unappeasable was the fact that he signed the Munich agreement without reading it through thoroughly. Instead of making Chamberlain notice how insignificant this therefore made the Munich agreement, he returned to Britain as a 'hero'. This makes Chamberlain seem much more of a na�ve politician than an honourable one. Instead of pursuing with appeasement when Hitler seemed less than dedicated to it, Chamberlain should have concentrated more on rearmament and gaining allies in preparation for a war which was imminent. Chamberlain was right to an extent to surround himself with people willing to work towards the same goals, and who believed in the same as him, as without this a government is essentially a weak one. However Chamberlain was not willing to listen to opinions of people that disagreed with his in any way. This is a weakness for any politician, as politicians need to work together and point out possible improvements in each other's ideas. Chamberlain was not honourable in sidelining his foreign secretary Eden, as this was a sly move. Eden was interested in making allies, whereas Chamberlain was interested in lessening enemies. ...read more.

Appeasement was certainly an honourable policy to the extent that it was a moral and ethical one, as it was designed to prevent war. It is easy to use hindsight to discredit Chamberlain's attempts, as war inevitably did break out in 1939. However he went to new lengths, such as 'shuttle diplomacy', to negotiate with Hitler, who was a difficult man to work with as Chamberlain admitted. Perhaps Hitler was always the stronger character and politician, who was determined to fight for his beliefs, not have things given to him, which could be why appeasement failed. However, Chamberlain's attitude towards his foreign secretary Eden was incredibly arrogant. Had he worked with Eden, ensuring they built strong allies such as the USA, this could have deterred Hitler from declaring war. This shows how Chamberlain allowed pride and reputation to dictate his politics and diplomacy. Chamberlain gave Hitler too much leeway, and should have realised sooner that Hitler was not interested in appeasement, but war. Therefore he should have put more into rearmament and ally-building sooner. Chamberlain showed great honour in his determination to try and prevent war, and in essence appeasement was an honourable policy. However appeasement was obviously failing as Hitler made more and more demands, which somehow defeats its honour. Neville Chamberlain had serious flaws to his character and dealings with appeasement which too took away from his honour, as did his and Eden's approaches toward each other. Therefore initially appeasement was honourable, as was Chamberlain for pursuing it, but both began to lose their honour when appeasement was obviously failing, and Chamberlain was leading through naivety and over-confidence in his own judgement and powers of persuasion. ...read more.