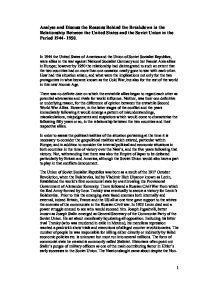 Analyse and Discuss the Reasons Behind the Breakdown in the Relationship Between the United States and the Soviet Union in the Period 1944- 1950. In 1944 the United States of America and the Union of Soviet Socialist Republics, were allies in the war against National Socialist Germany and her Fascist Axis allies in Europe; however by 1950 the relationship had disintegrated to such an extent that the two countries had on more than one occasion nearly gone to war with each other. How had this situation arisen, and what were the implications not only for the two protagonists in what became known as the Cold War, but also for the rest of the world in this new Atomic Age. There was no definite date on which the erstwhile allies began to regard each other as potential adversaries and rivals for world influence. Neither, was their one definitive or underlying reason, for the difference of opinion between the erstwhile Second World War Allies. However, in the latter stages of the conflict and the years immediately following it would emerge a pattern of misunderstandings, miscalculations, misjudgements and suspicions which would come to characterise the following fifty years or so, in the relationship between the two countries and their respective allies. In order to assess the political realities of the situation pertaining at the time it is necessary to consider the geopolitical realities which existed, particular within Europe; and in addition to consider the internal political and economic situations in both countries in the time of victory over the n**i's, and the five years following that victory. Not, withstanding that there was also the Empire of Japan to be defeated particularly by Britain and America, although the Soviet Union would also have a part to play in that conflicts denouement. The Union of Soviet Socialist Republics was born as a result of the 1917 October Revolution, when the Bolsheviks, led by Vladimir Ilich Ulyanov known as Lenin, Established the world's first communist state by overthrowing the Provisional Government of Alexander Kerensky. ...read more.

Kennan advised toughness when dealing with the Soviet Union and essentially called for a US policy of containment of Soviet influence, as opposed to the view of Roosevelt, which sought to encourage the Soviet Union into a new liberal democratic order. However, at this stage Truman was not yet ready for a policy of containment, if not idealistic enough to take Roosevelt's position he was still hoping for some kind of rapprochement with Stalin. Winston Churchill captured the mood of the times (15th March 1946) from an Anglo/ American perspective at any rate, when in a speech in Fulton, Missouri he declaimed to an audience that included a nodding President Truman that "... from Szczecin in the North to Trieste on the Adriatic an iron curtain has descended on the continent." Churchill also used this speech to call for an alliance of "English speaking nations". Stalin was, not altogether unsurprisingly, alarmed at the thrust of Churchill's rhetoric, as in Soviet eyes the target of this proposed alliance could only be the Soviet Union itself: and made his feelings public in an interview given to Pravda on the 13th March 1946. Stalin reiterated Soviet concerns viz. Anglo- American aggressive tendencies and equated the undertones of Churchill's speech to the r****t ones orated by Adolf Hitler. Stalin also pointed out that the Soviet Union had been invaded via neighbouring countries that were unsympathetic to the Soviet Union. Thus, it did not entail a massive leap in logic to surmise that one of Stalin's primary aims was to ensure that all neighbouring states were at the very least pro- Moscow. Perhaps the single largest issue to emerge in the immediate post war years was the status of the defeated Germany. In 1946 Germany was administered by the four victorious allies i.e. the United States, the Soviet Union, the United Kingdom and France (still, smarting over having been left out of the Great Power conferences). ...read more.

The Soviet Union by dint of its support for Marxist regimes found itself being dragged along on the coattails of Mao's revolutionary China. Once underway the cold war developed a momentum of it's own and its logic embedded itself in the mindset of policymakers in Washington and Moscow. At every turn either superpower would see the nefarious hand of the other behind every event: more often than not erroneously. It is tempting to imagine what the outcome would have been had President Roosevelt not died in 1945. In order to avoid the Cold War the situation needed thought that was imaginative and could see things in a way that was novel. Unfortunately for the world no one emerged in either side of the Iron Curtain with the necessary breadth of vision. Stalin was undeniably a tyrant, and it would have been unlikely that a Soviet Union led by him would have been able to reach a long-term rapprochement with the West. However, the great mistake made by the West was in assuming that the monolithic state espoused by Stalin was truly representative of the Communist Part of the Soviet Union. Indeed Stalin was unique and by tarring his sucessors with the same brush the West was unable to change its perception when a new and potentially more accomadating power took charge in the Kremlin. The Soviet Union for its part made error of judgement so vast as to be inexcusable. Perhaps the greatest of which was its failure to join the Marshall Plan. That and the desire to supplant any form of independent government in Eater Europe, proved in the long term to harbour the seeds of the systems eventual destruction. If more thoughtful council had prevailed, on both sides then perhaps the next fifty years could have been entirely changed. Instead the only real winners of the cold war were the" industrial- military complexes" as Eisenhower was to term it on both sides, although in the long term only that of the West proved to have the longevity to be called by some the winner. Mark Rowantree 1 ...read more.