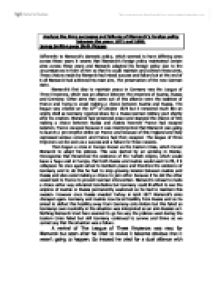 Analyse the Aims successes and failures of Bismarck's Foreign policy between the years 1871 and 1890.

Analyse the Aims successes and failures of Bismarck's Foreign policy between the years 1871 and 1890. James Smith-Lower Sixth Picasso Differently to Bismarck's domestic policy, which seemed to have differing aims across these years it seems that Bismarck's foreign policy maintained certain aims across these years and Bismarck adapted his foreign policy due to the circumstances in front of him so that he could maintain and achieve these aims. These choices made by Bismarck had mixed success and failure but at the end of it all Bismarck had achieved his main aim, The preservation of the new German state. Bismarck's first idea to maintain peace in Germany was the League of Three Emperors, which was an alliance between the emperors of Austria, Russia and Germany. Other aims that come out of this alliance were the isolation of France and trying to avoid making a choice between Austria and Russia. The league was created on the 22nd of October 1873 but it remained much like an empty shell as Germany rejected ideas for a Russo-German military pact shortly after its creation. ...read more.

Bismarck's refusal to make a choice either way infuriated Gorchakov but Germany could ill-afford to see the empires of Austria or Russia permanently weakened so he had to maintain this evasion. However once Russia invaded Turkey in April 1877 Bismarck's aims changed again. Germany and Austria now faced hostility from Russia and so he aimed to deflect this hostility away from Germany onto Britain but this failed as Germanys own neutrality in the situation was interpreted as an anti-Russian act. Nothing Bismarck tried here seemed to go his way the policies used during the Eastern Crisis failed but still Germany continued to survive and thrive so we cannot say that the situation was a failure. A revival of The League of Three Emperors was next for Bismarck but soon after he tried to revive it became obvious that it wasn't going to happen. So instead he tried for a dual alliance with Austria but his reasons for doing this are not certain. ...read more.

The emergence in France of a peaceful bourgeois republic in 1877 meant that Bismarck could stop his prolonged aim of isolating France as their threat was temporarily numbed. It also meant that Bismarck who, according to one argument, was trying to create a middle Europe bloc could take this rare chance of creating friendly relations with France. He did this by proposing an Entente meaning friendly relations between two states. His likelihood of making this entente work increased when he made himself "presentable to France" by taking hold of African colonies in 1884 and therefore causing an argument with the British and giving the French and Germans a reason to have a relationship which was clearly the fear of Britain. Later that year the proposed colonial entente was agreed between the two nations and political success was Bismarck's again. This however quickly fell through as a new war minister who was very anti-German was employed meaning that the political climate changed rapidly in the direction of anti-entente. ...read more.