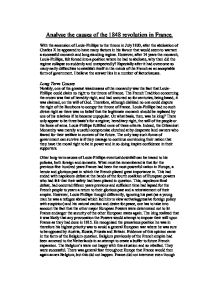 Analyse the causes of the 1848 revolution in France.

Analyse the causes of the 1848 revolution in France. With the ascension of Louis-Phillipe to the throne in July 1830, after the abdication of Charles X he appeared to have many factors in his favour that would seem to warrant a successful monarch and long standing regime. However, after 14 years the monarch, Louis-Phillipe, felt forced into a position where he had to abdicate, why then did the regime collapse so suddenly and unexpectedly? Especially after it had overcome so many early difficulties to establish itself in the minds of the French as an acceptable form of government. I believe the answer lies in a number of factor/causes. Long Term Causes Notably, one of the greatest weaknesses of the monarchy was the fact that Louis-Phillipe could claim no right to the throne of France. The French Tradition concerning the crown was that of heredity right, and had occurred so for centuries, being based, it was claimed, on the will of God. Therefore, although disliked no one could dispute the right of the Bourbons to occupy the throne of France. Louis-Phillipe had no such divine right as there was no belief that the legitimate monarch should be replaced by one of his relatives if he became unpopular. ...read more.

which disappointed his subjects and in the scenario where he did become active he adopted positions that led to even more humiliation than inactivity would have bestowed. Another aspect of Louis-Phillipe's reign that could of led to his downfall can be rooted in his domestic policy. Again here inactivity was favoured by the king. Once the regime was established and certain basic rules changed to the kings liking the king's view was that everything was working well so there was no use in tampering with it. Almost, that the system was beyond improvement. Unfortunately for the king, this was not a widely shared view. The main bone of discontent was concerning the current voting system. Many hankered for a reform especially as there was emerging a new class, a group of men who considered themselves to be part of the social elite and yet who didn't have the right to vote. Their cause was championed by the Legislative assembly (with Thiers an ardent supporter) a situation which made life more difficult for the king and his government. Another reason for the eventual collapse of the July monarchy can be traced back to the actual person of the king. ...read more.

on a par also with the backdrop of economic depression and social consciousness that was concurrent at the time however the questions still remains whether these on their own would have been enough to make a successful revolution and if whether the king had acted correctly and strongly, he would not have fallen It seems it was the kings inactivity that pervaded every part of his professional and personal life (foreign and domestic policy, personality and lifestyle and ultimately in the last days leading up to his abdication) that eventually led to his downfall. (Felt that this wasn't a satisfactory conclusion, found it hard to articulate here, how could I improve it, there seemed to be so many possibilities) Use ready made alternative forms of govment in conclusion to show why fist point was important. Domestic policy - if their had been an electorate reform the regime would have won the cative support of the 'new group' Personality- he was lifestyle- they Hort term- Louis-Phillipes lack of stubbornessdismayed his supporters who say this as an indication that the end was near and nobody wants to support a lost acuse . Louis-Phillipe was still in the position to use the army and stand strong but the lack of support shown by the National Guard seemed to have b Louis-Phillipe ...read more.