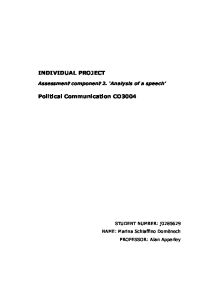 'Analysis of a speech' - Political Communication.

INDIVIDUAL PROJECT Assessment component 2. 'Analysis of a speech' Political Communication CO3004 STUDENT NUMBER: j0285629 NAME: Marina Schiaffino Dom�nech PROFESSOR: Alan Apperley POLITICAL COMMUNICATION A politician can use many different techniques to communicate him- or herself with the audience. One of the most used is the speech. Through this technique we get a direct communication with the audience, it's pretty much sure that the message has arrived the way you want to the listener if you can see their faces and their reactions, that if you send it to the TV or the radio. The main points for analysing a speech are format and content: FORMAT ANALYSIS Comparison: Self- and with others Using this strategy is very common. In different points of his speech, Bush match himself up to different main characters in the history. For example, in the phrase: 'Ben Franklin was here, Thomas Jefferson and, of course, George Washington, or, as his friends, called him, George W.'. In this point he is comparing himself with one of the fathers of the actual American society: George Washington. For his speech, he really don't need to say that; he only makes this because he wants that people associates George W. (Washington) ...read more.

Finally, Bush cannot forget to say The Phrase (in capital letters) that all American politic in the world as much as he is democrat or republican someday will say: 'My friend, (...) captured the way I feel about our great land, a land I love.' Appeal to emotiveness Politics are very complex figures. They are people who have to be in good relations with everybody, so they have to like everybody. And one of the easier ways of arriving to the people's heart, is through emotiveness. The campaign team of a political can find different methods to do this: Politics seem many times distant and different to the common people, for this reason they try to approach their image to the normal man. People don't want to give their votes to a man that will not protect their interests, that seems to much posh to defend them. But they won't give their vote too, to a garrulous dressing in jeans. A spin doctor has to find the exact balance between these personalities. There's a clear example here: 'I'm especially grateful tonight to my family. ...read more.

culture that values life - the life of the elderly and sick, the life of the young and the life of the unborn.' It's hard to talk about respect for life, when we see how the Guantanamo prisoners are being treated. The tortures they are suffering are against all the laws of the United Nations. Moreover in this declaration, Bush makes a reference to the abortion. If he says he wants to respect the life of the unborn, we can assume that he is against it. CONCLUSION With this discourse, I have discovered two things about the Americans. They believe that they are the centre of the world: 'The world needs America's strength and leadership.' And also, that their way of making politics is very different to what I'm used. For example I cannot imagine any of the Spanish politicians saying something like 'God bless Spain', or 'I love Spain'. We have seen in the format analysis that politicians always say more things in their speeches that the things it seems they say. There are always second readings to their phrases, and these readings many times wear a charge of propaganda that is trying t convince the audience about a determined topic. ...read more.