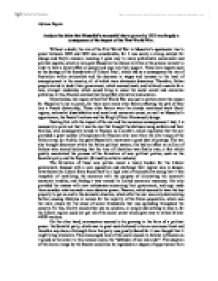 Analyze the claim that Mussolini's successful rise to power by 1922 was largely a consequence of the impact of the First World War. Without a doubt, the role of the First World War in Mussolini's spectacular rise to power between 1920 and 1922 was considerable, for it was surely a strong catalyst for change and Italy's renewal, meaning it gave way to many problematic economical and political aspects, which in turn gave Mussolini the chance to strike at the precise moment in order to have a direct affect on people and ergo win their support. These were aspects such as the damage of the foundations of 'Liberal Italy', which had as a consequence the rise of frustration within nationalists and the decrease in wages and increase in the level of unemployment in the country, all of which were obviously disastrous. Therefore, Italian people started to doubt their government, which seemed weak, and initiated a search for a new, stronger leadership which would bring to cease the social unrest and economic problems; to this, Fascism seemed like the perfect alternative and solution. Nevertheless, the impact of the First World War was just to certain extent the reason for Mussolini's rise to power, for there were many other factors affecting the path of Italy into a Fascist dictatorship. ...read more.

the possible consequences that his actions could bring, such as provoking the conservatives to make the authorities crush the fascists if their use of violence went too far; this measure of consciousness made him a great politician. Furthermore, in contrast to the slow Liberal reaction, Fascists were fast to accept their role as the alternative to Socialism and dealt with the Social General Strike with great speed; and by putting a stop to the socialist threat they won many votes in the parliament and had an effective result in the support of Italians; on the other hand, the lack of reaction from the Liberals only showed their incompetence to restore law, order and public confidence in their regime; which in turn continued encouraging the urban educated classes to keep thinking that they were in the path towards a civil war, meaning that the sense of crisis in the circumstances had not yet ceased to exist. In addition, Mussolini exploited to the full the situation of the 'General Strike' and thought of it as the opportune moment to oppose the communist threat and hence use the socialist's failure to appeal to the people as a man whose intentions were to save Italy from its inadequate Liberal government and propose a new regime which would be the "salvation of Italy". ...read more.

But as we can see, the March on Rome, instead of leading to a disastrous moment in Mussolini's life as it could have; it was the catalyst to the rise of power of Mussolini, for it provided the exact amount of pressure the King needed to make Mussolini the youngest Prime Minister of Italy. With the above historical debate we can say that the First World War provided the necessary conditions for Mussolini's rise to power, however, these were not sufficient and therefore other affecting factors were eventually needed to complete his successful rise to power, such as the terribly weak Liberal government which enabled the Italian people to look elsewhere for strong leadership and ergo turn to Fascism as an alternative and solution to the Socialist threat, and the brilliant tactics that Mussolini uses as well as his great deal of opportunism which made him capable to turn disastrous situations to his advantage. Such as the Matteoti crisis which forced him to use his ability to speak in front of the masses and convince them of the justification for violence; he also benefited from this crisis by abusing the fact that all other forces in the parliament left hi alone and in control of it. Having said the above, it can be understood that Mussolini's rise to power was, as Richard Parrish describes: "a multi-causal phenomenon". Adriana Zapata ...read more.