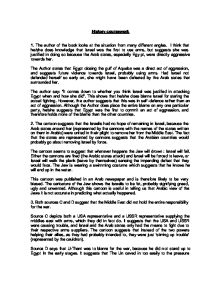 History coursework 1. The author of the book looks at the situation from many different angles. I think that he/she does knowledge that Israel was the first to use arms, but suggests she was justified in doing so because the Arab states, especially Egypt, were directly aggressive towards her. The Author states that Egypt closing the gulf of Aquaba was a direct act of aggression, and suggests future violence towards Israel, probably using arms. Had Israel not defended herself so early on, she might have been defeated by the Arab states that surrounded her. The author say: "it comes down to whether you think Israel was justified in attacking Egypt when and how she did". This shows that he/she does blame Israel for staring the actual fighting. However, the author suggests that this was in self-defence rather than an act of aggression. Although the Author does place the entire blame on any one particular party, he/she suggests that Egypt was the first to commit an act of aggression, and therefore holds more of the blame than the other countries. 2. The cartoon suggests that the Israelis had no hope of remaining in Israel, because the Arab states around her (represented by the cannons with the names of the states written on them in Arabic) were united in their plight to remove her from the Middle East. The fact that the states are represented by cannons suggests that the Arabian countries would probably go about removing Israel by force. ...read more.

4. Source E is suggesting that any military action Egypt might take against Israel, it is justified in doing so, as it is defending its Arab neighbour, Syria, rather than being aggressive towards Israel. However, Sources F and G are both very aggressive towards Israel. They suggest that any military action taken against Israel is aggressive, rather than in self-defence. The sources, although all from Arab leaders, none of the leaders are from the same Arab state. Sources F and G do contradict source E in saying that they are acting aggressively rather than in self-defence, as source E suggests. The two latter sources do not, however, prove the former false because they are all taken from different nations. As it was Egyptian troops that moved across Sinai source E is more relevant. However, Egypt needed to protect their reputation, and as it was their troops who advanced, it is likely to have a spin on it, so that Egypt is portrayed in a more positive light. 5. Both sources are of use to a historian in studying the causes of the 6-day war. However, source I is probably more reliable than source H. Both Sources are primary evidence, which would be very helpful to the historian. Source H is potentially biased because it is written by an Israeli, whose sympathies are likely to fall towards his own country and perhaps cause him to exaggerate the atrocities committed by Egypt. ...read more.

I think that, like source A says, Although Israel were the first to use arms, The Arab states were the aggressors and were responsible for starting the war, Egypt the most aggressive of the Arab states. 8. There is a lot of disagreement over who is to blame for the day war because it is a very complicated issue with many parties involved. For example, the main counties involved would not be so much of a threat to each other had other counties not been arming them. It is hard to say if they were a threat to each other because of the arms (in which case the arms suppliers would be to blame for the war) or if they were a threat to each other because they themselves were aggressive towards each other (in which case it would be the countries themselves that were to blame). It is also hard to know how far to trace to conflict back to find the original aggressor because the land of Israel has been fought over for many years. Some might say that when deciding who caused the 6-day war one should only look at the parties immediately involved. However, the conflict could be traced back to when England and France first divided the land, sparking the arguments of whom the land rightful owners were. Because the conflict can be traced back so far, there is no definite starting point to it, which also makes it hard to place the blame on any one particular party. ...read more.