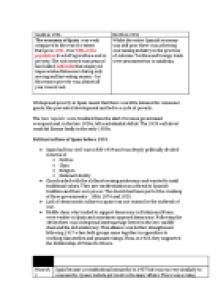 ﻿South in 1931 North in 1931 The economy of Spain was weak compared to the rest of western Europe in 1931. Over 50% of the population lived off agriculture and in poverty. The rich owned vast areas of land called latifundia that employed impoverished labourers during only sowing and harvesting season ? for this reason poverty was, almost all year round, vast. Whilst the entire Spanish economy was still poor there was a thriving coal mining industry in the province of Asturias. Textiles and foreign trade were prominent too in catalonia. Widespread poverty in Spain meant that there was little demand for consumer goods, this prevented development and led to a cycle of poverty. The New republic were troubled from the start. Previous government overspent and, in the late 1920s, left a substantial deficit. The 1929 wall street crash hit Europe badly in the early 1930s. Political culture of Spain before 1931 * Spain had four civil wars 1830-1939 and was deeply politically divided in terms of * Politics * Class * Religion * National Identity * Church sided with the old land-owning aristocracy and wanted to instil traditional values. They saw modernisation as a threat to Spanish tradition and their own power. The church had been part of the crushing of three governments ? 1856, 1874 and 1923. * Lack of democractic culture in spain was one reason for the outbreak of war. * Middle class, who tended to support democracy in Britain and Franc, were weaker in Spain and sometimes opposed democracy. Following the 1850s there was widespread intermarriage between the new middle class and the old aristocracy. ...read more.

The Moroccan was in 1926, where the Spanish army was defeated, meant that the regime lost much of the popularity (as well as the economy slowing down and unemployment rising.) The Great Depression of 1929 ruined Spain?s economy. He resigned January 1930, dying two months later in Paris. Years of reform --- Widespread enthusiasm for the Second Republic (known as ?La Nina Bonita? ? the beautiful girl) led to overwhelming support in the June 1931 election for parties supporting the Republic. However, by 1933 traditional conservative forces where horrified at the governments attack of their interests. The conservates opposed reforms which hindered the influence of the Church, army and land. By 1933 President Azana had lost popularity and a re-election was called --- Provisional Government The provisional government was to govern Spain until a new constitution had been agreed from when Alfonso XIII left the country in April 1931. The provisional government was a coalition of four parties which spanned the whole political spectrum and could agree on little ? except the ending of the Spanish monarchy. Spanish socialist Party (PSOE) Republican Action Party Radical Republican Party Conservatives Wanted radical social change. Strongly anti-clerical. Represented by Largo Caballero Liberal reformers. Strongly anti-clerical. Mainly middle-class. Represented by Manuel Azana. Represented the middle-class interest. Larmed by the radicalism of socialism. Represented by Alejandro Lerroux. Wanted to continue the pre-1931 system of government but without a monarchy. Represented landowners, army and most of the church. --- Beginnings of the Republic --- The republic was born during the worst years of depression. In march 1936 Spanish industry was producing only 77% of its 1929 output. ...read more.

Retribution was rapid and severe. Reinforcements were sent to the town (including the Assault Guard which was the urban paramilitary squad). Armed with machine guns they were determined to wipe out resistance. 20 prisoners were shot in cold blood, some after long periods of torture. Houses were set on fire, including the anarchist ringleader (known as ?Six fingers?) and people were burnt alive. Effect of Casa Viejas was serious hatred and discredit to Azana?s government in late 1933. The working class, who were originally in large support of the Republic now became bitter. The right saw opportunity to campaign against such actions and bring together right-wing forces into one group for the next election. In Autum 1933 the Socialists abandoned their policy of co-operation with Republicans and president Zamora dismissed the government. Fresh elections were called in for November 1933. Successes of the Second Republic * Spaniards were granted a wide rang e of civil and political rights, including granting the vote to all women. Laws on civil marriage and divorce were protected by the constitution and were the most advanced in Europe at the time * Workers in industry were granted eight-hour days and benefits such as paid overtime and paid hoidays * A massive programme of school building was begun * The rights of agricultural workers were strengthened, including security of tenure for tenants farmers and increased wages for landless labourers * Despite its limitation, the Agrarian Reform Law did attempt to tackle the lane question * Some attempt to tackle over-manning of armed forced * Position of catholic Church within Spanish life was restricted and this began the start of educational reform * Catalan Statue was, perhaps, the governments greatest success. It settled a long-standing grievance and encouraged support from the Catalonians for the Republic. ...read more.