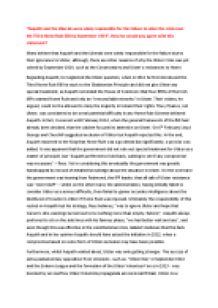 &quot;Asquith and the Liberals were solely responsible for the failure to solve the crisis over the Third Home Rule Bill by September 1914&quot;. How far would you agree with this statement?

﻿?Asquith and the Liberals were solely responsible for the failure to solve the crisis over the Third Home Rule Bill by September 1914?. How far would you agree with this statement? Many believe that Asquith and the Liberals were solely responsible for the failure due to their ignorance to Ulster, although, there are other reasons of why the Ulster Crisis was yet solved by September 1914, such as the Conservatives and Ulster?s resistances to Home. Regarding Asquith, he neglected the Ulster question, when in 1912 he first introduced the Third Home Rule Bill he stuck to the Gladstonian Principle and did not give Ulster any special treatment, as Asquith reminded the House of Commons that four-fifths of the Irish MPs wanted Home Rule and only an ?irreconcilable minority? in Ulster. Their wishes, he argued, could not be allowed to deny the majority in Ireland their rights. Thus, finance, not Ulster, was considered to be a real potential difficulty in any Home Rule Scheme believed Asquith. In fact, it was not until February 1912, when the general framework of the Bill had already been decided, that the cabinet focused its attention on Ulster. ...read more.

Ulster now became the main issue in British politics. ?It was no longer a question of our coercing Ulster?, said one Liberal, ?it was a question of our preventing Ulster from coercing us?. The Curragh Incident and the formation of the Irish Volunteers worsened the situation, as did the Larne gun-running. There was secret talks between Asquith and Bonar Law at the end of 1913 to see if an agreed settlement was possible. Asquith also spoke to Carson on 16th December and offered him ?Home Rule within Home Rule?. Carson however now wanted 6 counties to be excluded, instead of 4 ? like it was in 1912. Asquith rejected this as he struggled to get Redmond to accept 4 counties to be excluded on a temporary measure, never mind 6. On the 25th May 1914 the Third Home Rule Bill was introduced and an agreement for Ulster was yet achieved and ironically, it was the outbreak of the First World War which ?saved? Asquith and his government from the consequences of their failing over Home Rule. ...read more.

Regarding Bonar Laws attentions many believe, such as Adams that ?the Conservative leader?s primary desire was to bring an election on the question of Home Rule?, as he believed the Liberals didn?t have the mandate for it and so the Conservatives could eject the Liberals from office. In conclusion, I agree with the statement to an extend that Asquith and the Liberals were responsible for the failure to solve the Home Rule Crisis, due to Asquith?s ?wait and see? policy as the 1912 opportunity was perfect and it would have also spilt the Conservatives and the Unionists believes Jackson ? thus the Liberals would have been strengthened. But, there are also other and important reasons in why the Home Rule Crisis wasn?t solved, such as Ulster Unionists resistance and their unwillingness to compromise, as well as the new style of approach the Conservatives took and how they played the ?Orange Card? (Churchill). So too did the arms race with Germany, as it distracted the Conservatives from solving the Crisis by September 1914, as they were heading into war and other matters had to be shelved for now. ...read more.