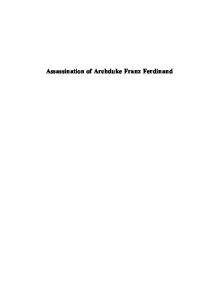 The Assassination of Archduke Franz Ferdinand led to World War One. The series of events made each country help there allies which then led to the out break of WW1.

Franz Ferdinand Karl Ludwig Josef von Habsburg-Lothringen was born in Graz, city of Austria, on the 18th of December in 1863 (Fisher, 2001) .  In 1883 Franz Ferdinand started his career in the Austrian Army working his way up from captain in 1885, major, colonel and then general in 1896. Everything changed though in 1889 when Ferdinand's cousin Crown Prince Rudolf shot himself in his hunting lodge and with the later death of Karl Ludwig, Franz Ferdinand’s father in 1896. The next person that was heir to the throne was Franz Ferdinand. Franz Ferdinand was made Inspector General in 1913 of the Austria-Hungarian Army. Ferdinand was popular in the Military since he was for the modernization of military and the expansion of the navy (Simkin, 2002) .

In Serbia however he was less popular, the people did not like how Austrian-Hungary ruled and favoured union with Serbia. There had been assassination attacks on Austrian’s before, when General Vasesanin was about to open parliament in Sarajevo, the capital of Bosnia und Herzegovina (Simkin, 2002) .

Ferdinand went to Serbia because he was asked to do so. In 1914 the Governor of the Austrian provinces of Bosnia-Herzegovina invited Ferdinand who was the Inspector General of the Austria-Hungarian Army to look at his troops and direct army manoeuvres in close by mountains. During this invitation he mentioned that he was welcome to bring his wife Sophie with him, although his wife was usually not welcome on such events and also was not favoured by the royal family. This added to the tragedy of the up coming event.

“All the citizens of the capital city of Sarajevo find that their souls are filled with happiness, and they most enthusiastically greet Your Highnesses' most illustrious visit with the most cordial of welcomes, deeply convinced that this stay in our beloved city of Sarajevo will ever increase Your Highnesses' most gracious interest in our progress and well-being, and ever fortify our own most profound gratitude and loyalty, a loyalty that shall dwell immutably in our hearts, and that shall grow forever” (Curcic, 1914) .

Franz Ferdinand and his wife arrived by train in Sarajevo at 10am on the 28th June, 1914. They were being waited for by the General Oskar Potiorek, who then went with them to City Hall for the official reception (Fisher, 2001) . On there way there Nedjelko Cabrinovic, a Black Hand Terrorist threw a stick of dynamite at the car that Ferdinand was sitting in but the driver seeing the explosive speeds ahead and the car behind then got hit and two of the occupants got badly injured. The driver of Ferdinand’s then car drove as fast as possible, this stopped the other members of the Black Hand to start more assassination attempts (Hacken, 2001) .

After the official reception at the City Hall, Ferdinand wanted to visit the injured members of his party in the Hospital. This was seen as very dangerous so they suggested that Duchess Sophie should stay behind, but she refused and went with her husband (Simkin, 2002) .

The route to the hospital was dangerous so they tried to avoid the crowds by going directly to the hospital, on the way the driver who was not informed about the plan took a wrong term on Franz Joseph Street. On this street stood Gavrilo Princip a member of the Black Hand organisation. The driver was informed that he was wrong and when he was backing up they drove by Gavrilo Princip who drew his gun and fired several rounds into the royal car. Franz Ferdinand and his wife were both hit. They were imideatly driven to the governor’s residence where they died shortly after they had arrived (Simkin, 2002) .

Archduke Franz Ferdinand was a very important person to Austria-Hungary and that he visited Serbia was quit risky since it was know that the Serb’s did not like the Austria-Hungary rule. That he and his wife were murdered by a Serbian Terrorist made Austria-Hungary extremely angry so they gave Serbia an Ultimatum they had to follow, when Serbia did not meet the demands Austria-Hungary had to declare war on Serbia. Serbia would have not had a chance to fight Austria-Hungary by itself so Russia got involved. This lead to France having to join the war as well because of the agreement they had made with Russia long before. The Germans did not like that so they decided to write Austria-Hungary a blank check. Later on Britain also joined because they were worried that Germany would gain too much power and take over most of Europe, which could have happened because the Germans had the second strongest army in Europe after Great Britain.