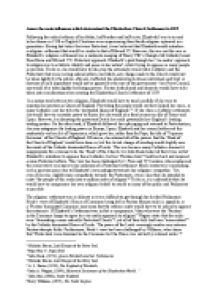 ﻿Assess the main influences which determined the Elizabethan Church Settlement in 1559 Following the radical reforms of her father, half-brother and half-sister, Elizabeth I was to ascend to her throne in 1558 as English Christians were experiencing their fourth religious upheaval in a generation. Having had tutors that were Protestant, it was believed that Elizabeth would introduce a religious settlement that would be similar to that of Edward VI. However, this was not the case as Elizabeth?s religious settlement was a moderate merging of Henry VIII?s (though still Catholic) break from Rome and Edward VI?s Protestant approach. Elizabeth?s goal through her ?via-media? approach to religion was to establish stability and peace in her nation[1], whilst trying to appease as many people as possible. To do so, she would have to side-step the extremely conservative Catholics and the Protestants that were craving radical reform. Inevitably, any change made to the Church would not be taken lightly by the public; after all, it affected the relationship between individuals and God. A doctrine of such importance would not be ignored by the core of her government ? her Privy Council, nor would it be taken lightly by foreign powers. Factors both abroad and domestic would have to be taken into consideration when creating the Elizabethan Church Settlement of 1559. In a nation torn between two religions, Elizabeth would have to tread carefully if she were to maintain her position as Queen of England. ...read more.