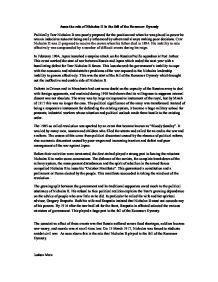 Asses the role of Nicholas II in the fall of the Romanov Dynasty Politically Tsar Nicholas II was poorly prepared for the position and when he was placed in power he was an indecisive autocrat being easily influenced by others and always making poor decisions. Czar Nicholas II was ill-prepared to receive the crown when his father died in 1894. His inability to rule effectively was compounded by a number of difficult events during his reign. In February 1904, Japan launched a surprise attack on the Russian Pacific squadron at Port Arthur. This event marked the start of war between Russia and Japan which ended the next year with a humiliating defeat for Tsar Nicholas II forces. ...read more.

The army was by large an impressive instrument of the royal, but by March of 1917 this was no longer the case. The political significance of the army was transformed. Instead of being a responsive instrument for defending the existing system, it became a huge military school for peasants, industrial workers whose situation and political outlook made them hostile to the existing order. The 1905 so called revolution was sparked by an event that became known as "Bloody Sunday". It was led by many men, women and children who filled the streets and called for an end to the war and a reform. The causes of this came from political discontent caused by the absence of political reform, also economic discontent caused by poor wages and increasing taxation and defeat and poor management of the war against Japan. ...read more.

His refusal to face political realities explains the Tsar's growing dependance on the advice of people who saw little as he did. In particular he relied his wife and her spiritual advisor, Gregory Rasputin. Both his wife and Rasputin insisted that Nicholas II must not concede any of his powers. By 1916 after the tsar had left for the front, Rasputin in effected selected the various ministers of government. This played a huge part in the fall of the Romanov Dynasty. The cumulative effect of these events was that Russia suffered severe food shortages, soldiers became war-weary, and morale was at an all-time low. On 15 March 1917, Nicholas was forced to abdicate amidst civil war. As seen above this is the role that Nicholas II played in the fall of the Romanov Dynasty. Joshua Mete ...read more.