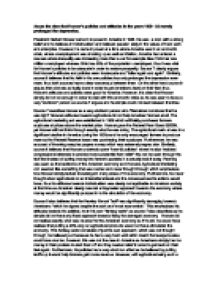 a***s the view that Hoovers policies and attitudes in the years 1929-33 merely prolonged the depression.

a***s the view that Hoover's policies and attitudes in the years 1929-33 merely prolonged the depression. President Herbert Hoover came in to power in America in 1928. He was a man with a strong belief and he believes in individualism and believed passionately in the values of hard work and enterprise. However, he came in power at a time where America was in an economic crisis, where unemployment was shooting up as well as inflation, America had entered a new era where inequality was increasing more than ever for example New York had one million unemployed whereas Ohio has 50% of the population unemployed, thus it was vital for Hoover's policies to be adequate in order to restore prosperity. Source 7 clearly argues that Hoover's attitudes and policies were inadequate and "failed again and again". Similarly, source 8 believes that his faith in his own policies has only prolonged the depression even more, thus both sources have a clear consensus between them. On the other hand source 9 argues that a lot was actually done in order to get Americans back on their feet, thus Hoover's attitudes and policies were good for America. However, it is clear that Hoover simply did not do enough in order to deal with this economic crisis as he was seen to be as a very "stubborn" person as source 7 argues and he simple could not read between the lines. ...read more.

however, this was not the case in America as Americans simply had no money in their pockets to start them off and they needed relief in order to get back on their feet again. Furthermore, his policies had a very short run effect as he believed by putting tariffs up it would help farmers gain more revenue. However, with agriculture being such a competitive market, it only led to retaliation as countries all across Europe could not afford high prices as they were in an economic crisis too. Furthermore, the Hawley-Smoot tariff resulted in the abandonment of free trade amongst European nations, thus it was extremely damaging for the agricultural market as they could not sell their surpluses and had to eventually dump their goods in different countries, therefore Hoover did pro long the depression. Furthermore, source 8 also argues that Hoovers approach towards unemployment was also not good enough as he "blocked direct aid to the unemployed". This is because of his hands off approach attitude that he undertook during the 1930s was not radical enough and could be seen as taking things "too modestly" as source 8 states. The Emergency Committee for Employment aimed to help agencies provide relief of $500, however, due to his self-reliance attitude he did not allow direct federal relief. This clearly shows how Hoover was not thinking ahead and his attitudes were far behind time as he did not realise exactly how badly Americans needed the governments help and it was crucial to intervene in the economy as much as possible. ...read more.

fits in with Parrish's view of how the "economic crisis required maximum cooperation" , which Hoover was not giving at that time as all banks and businesses needed some sort of relief which he was not doing. Furthermore, even if he was cooperated it was a little too late, thus Hoover did pro long the depression. Overall, it is clear the Hoover's approaches were not good enough for American society in the 1930s and he did pro long the depression. One vital error that Hoover made was the fact that he was not helping the unemployed as much as he should have as in order to stimulate the economy, a wage was needed and with a wage tax could have been paid which could have been used to fund the public with goods. Therefore, if Hoover had considered getting people into work this would have automatically had a positive knock on effect. Furthermore, a hands off approach was not needed in times of the depression as Americans did not have money to get back on their feet as many banks were not giving out loans due to the effects that the boom period had on them, therefore a lot of intervention was needed. Thus, it is clear that Hoover did make big mistakes during the depression as he did not see the reality of it and did not try to tackle the main problems as he had no detailed plan. ...read more.