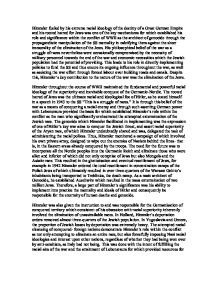 Himmler fueled by his extreme racial ideology of the destiny of a Great German Empire and his rooted hatred for Jews was one of the key mechanisms for which established his role and significance within the conflict of WWII as the architect of genocide through the propagandistic manipulation of the SS mentality in calcifying them against the sheer immorality of the elimination of the Jews. His philosophical belief of the war as a struggle of races nevertheless were occasionally compromised by the necessity of military personnel towards the end of the war and economic necessities which the Jewish population had the potential of providing. This leads to his role in directly implementing policies to fund the SS and thus ensure its ongoing influence throughout the war, as well as assisting the war effort through forced labour over building roads and canals. Despite this, Himmler's key contribution to the nature of the war was the elimination of the Jews. Himmler throughout the course of WWII maintained the fundamental and powerful racial ideology of the superiority and inevitable conquest of the Germanic-Nordic. The rooted hatred of Jews was the ultimate racial and ideological foe of Hitler, as he stated himself in a speech in 1943 to the SS "This is a struggle of races." It is through this belief of the war as a means of conquering a racial enemy and through such asserting German power with ...read more.

This was done with the intent of fulfilling the racial aim of the war and the attainment of Lebensraum for which provided resources for the war effort and a step towards fulfilling Himmler's goal of a powerful German-Nordic Empire. Himmler's ideological standpoint played an important role not only in his implementation repression and murder against Jews but it was also a means of which Himmler hardened the SS psychologically to withstand the atrocities in implementing genocide. He offered the troops a vision of racial conflict throughout history in which the Jews played a critical part. Furthermore, through propagandistic speeches he accentuated the racial hated of the SS and compelled his men to realize the notion of murdering one's own race if they don't efficiently implement his policies of extermination through labour as "because if the anti-tank ditch is not dug, German soldiers will die". Also, in order to ensure the efficiency in the implementation of his polices Himmler addressed commanding officers of the SS divisions where he spoke of the great fortress of Eurpoe of which they were privilege to defend and increase. Therefore, throughout the war Himmler's role, specifically within the holocaust involved psychologically motivating and hardening his subordinates and those implementing the act of genocide through the propagandistic delivery of his own racial and philosophical ideologies, imposing them upon others and calcifying them against the atrocities they would implement. ...read more.

The impact of Himmler's racial policies of genocide affected the nature of the war in that it is one which involved the systematic elimination of a race, as it is not just the outcome of total war, which Himmler claimed it to be in 1944 but also it was inherently a part of a nation's purpose to the war and the means of achieving a philosophical and ideological goal. However, Himmler's role within the war was not limited to the question of race, by 1943 due to the fall of Stalingrad and reverses in Africa, Hitler allowed for the expansion of the Waffen SS. Thus, by 1943, short on German SS personnel Himmler recruited 8 new divisions of men of which none were of German racial origin. For example, Bosnian Moslems were recruited and an entire SS division of anti-Bolshevist Ukrainians were formed. The effectiveness of these SS divisions in serving the needs of the German army varied however overall its inability to alter the direction of the war after Stalingrad and the expansion of Himmler's military ambitions towards the end of the war demonstrate the somewhat limited significance he played to the overall outcome of the war. Furthermore, this can be seen towards the end of the war where Himmler under the pressure of both the advancing Russian army and Hitler's rage drove him into retreat and lose regard for his armies, thus conducting a purge. ...read more.