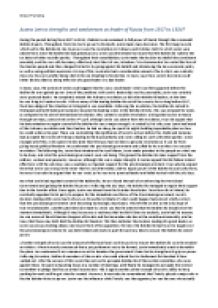 Assess Lenin's strengths and weaknesses as leader of Russia from 1917 to 1924.

﻿Oliver Perretta Assess Lenins strengths and weaknesses as leader of Russia from 1917 to 1924? During the period lasting from 1917 to 1924, Vladimir Lenin remained in full power of Russia through the communist Bolshevik party. Throughout, from his rise to power to his death, Lenin made many decisions. The first major events which Led to the Bolsheviks rise to power were the revolutions in February and October, both to which Lenin were absent from. Once the Bolsheviks had gained power, Lenin was determined to ensure that the Bolsheviks ruled to the exclusion of other socialist parties. Throughout their consolidation, Lenin made the decision to abolish the constituent assembly, end the war with Germany, effectively start the civil war, introduce ?War Communism? to control the lives of the Russian people and then changed his tactics by going against his beliefs and introducing the New economic policy as well as using political repression. On top of this, Lenin also had a considerable amount of luck which was evidently shown by his survival after being shot in the neck leading to his decline. In many ways then, Lenin?s decisions could either be described as being reflective of a good leader or a bad leader. ...read more.

This left the soviets as the only hope of true revolutionaries. Another great decision made by Lenin was that he ordered that the Bolsheviks should seize the moment immediately. Although it may be seen as a weakness that he didn?t listen to anybody, Lenin had his reasons. He was aware of the all-Russian Congress of Soviets and the November election at the constituent assembly, and he knew that these may both limit the Bolsheviks freedom. This then indicates the decision making of a great leader, as Lenin was always looking ahead, one step in front of his opposition. He knew the Bolsheviks had to act to topple over the provisional government; he was determined and ready to push forward any idea to ensure the Bolsheviks seized power. A further strength of Lenin was the amount of effort and hard work he put in to ensure the Bolsheviks won the October revolution. When Kerensky announced that a pre parliament was to be formed, Lenin immediately acted to demolish the plans. He condemned it as a manoeuvre not to broaden the government?s base but to strengthen its grip on power. Following his orders, Bolshevik members of the soviets who could attend the Pre Parliament first derided it then walked out. ...read more.

With this, Lenin made the drastic decision to become allies with Germany, by signing the Brest-Litovsk treaty with Germany which sealed their safety in World War 1 despite losing much land. Russia lost a huge slice of territory, amounting to a third of European Russia stretching from the Baltic to the Black Sea and including Ukraine, Russia?s major grain resource and the land lost contained a population of 45 million people. As well as this Russia had to pay 3 billion roubles in war reparations. However, he made the treaty on a gamble, it was purely ideological. He believed that Germany would lose the war to other western allies and Russia would get its land back. In the end this paid off, However, one may suggest that this risky gamble was not wise and therefore makes Lenin a bad leader. While he sat in his house, with his feet up, he made a huge gamble, yet, the simple fact remains that it did work and in the end Russia could only reap the rewards. To be a successful leader you need to take gambles to make progress, and on this particular occasion, Lenin made a huge gamble which proved to be a successful one. Following the treaty of Brest Litovsk and crushing of the constituent assembly, came the Russian civil war. It is widely suggested that Lenin Truly wanted a destructive civil war ...read more.