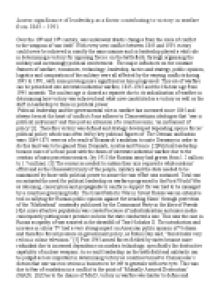 Assess significance of leadership as a factor contributing to victory in warfare from 1845 1991.

﻿Assess significance of leadership as a factor contributing to victory in warfare from 1845 ? 1991. Over the 18th and 19th century, war underwent drastic changes from the scale of conflict to the weapons of war itself. With every new conflict between 1845 and 1991 victory could never be achieved in exactly the same manner and so leadership played a vital role in determining a victory for opposing forces: on the battlefield, through organising the military and increasingly political involvement. The major influences on the constant features of warfare; economies, technology, leadership, tactics and strategy, public opinion, logistics and composition of the military were all affected by the varying conflicts during 1845 to 1991, with some proving more significant as time progressed. This era of warfare can be periodised into interstate industrial warfare, 1845-1945 and the Nuclear age from 1945 onwards. The nuclear age is classed as separate due to its radicalisation of warfare in determining how victory was achieved and what now constituted as a victory as well as the shift in leadership to those in political power. Political leadership and the governmental role in warfare has increased since 1845 and always been at the heart of conflict if one adheres to Clausewitizian ideologies that ?war is political instrument? and thus just an extension of a countries aims, ?an instrument of policy?[1]. ...read more.

As a result leadership on the battlefield and militarily can be judged as less important in determining victory as countries turned to Clemenceau?s dictum that war was too serious a business to be left to generals with new eyes. This was due to fear of escalation in a conflict to the point of ?Mutually Assured Destruction? (MAD). [6] Due to the chance of MAD, victory in warfare was harder to define and achieve as destruction of an enemy would also mean destruction of oneself. Therefore the focus was put on the role of diplomacy, political leadership and for countries possessing nuclear weapons; the traditional chain of command was switched to the Head of State. The clearest examples are present in the Cold War through the creation of the Warsaw pact and the Cuban Missile Crisis, in which a ?Hot Line? was established between Soviet Russia and the USA: Kennedy and Khrushchev. [7] Military leadership, in the age of interstate industrial warfare, was vital for the planning of warfare due to the ever increasing scale in not only armies but the geographical distance war was spread over. This was closely linked to leadership on the battlefield where victories were achieved through the usage of NCOs, thus training from leaders was important. ...read more.