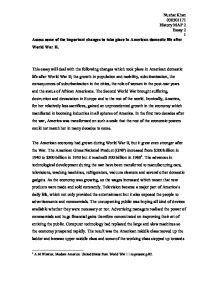 Assess some of the important changes to take place in American domestic life after World War II.

Assess some of the important changes to take place in American domestic life after World War II. This essay will deal with the following changes which took place in American domestic life after World War II; the growth in population and mobility, suburbanization, the consequences of suburbanization in the cities, the role of women in the post-war years and the status of African Americans. The Second World War brought suffering, destruction and devastation in Europe and to the rest of the world. Ironically, America, for her relatively less sacrifices, gained an unprecedented growth in the economy which manifested in booming industries in all spheres of America. In the first two decades after the war, America was transformed on such a scale that the rest of the economic powers could not match her in many decades to come. The American economy had grown during World War II, but it grew even stronger after the War. The American Gross National Product (GNP) increased from $200 billion in 1940 to $300 billion in 1950 but it reached$ 500 billion in 19601. The advances in technological development during the war have been transferred to manufacturing cars, televisions, washing machines, refrigerators, vacuum cleaners and several other domestic gadgets. As the economy was growing, so the wages increased which meant that new products were made and sold constantly. ...read more.

As a result, employment was brought to the door step and so people no longer travelled to cities to spend their money. Instead people from cities came to suburban areas to spend their dollars. The black people, the other minorities, and the poor section of the white population shopped in their localities where quality was decreasing and prices were increasing. For these ever growing mobile customers the franchise system was established. The first franchise right was bought from a fast-food establishment by a young entrepreneur Ray Kroc, and then gradually the franchise system became a prominent pattern in the country. While the Levitt development was satisfying one section of the community, the rest of the building industry started to cater for a wider range of income groups. These housing developments included shopping centres, schools, and churches. The private builders were proving to be successful in providing housing for American's suburban families. Soon, all over the country the pattern was repeated as moderate-income families settled for inexpensive prefabricated dwellings in the fringes of the cities. These were in part for the war veterans helped by FHA and VA, but these facilities were not available to black war veterans. The wealthier population chose architect-designed houses in suburbia. However, again this development was mainly for the white population and was not available to blacks. This meant that segregation and discrimination was systematically continued and deepened the division between two races. ...read more.

During the 1950s and 1960s, the women contributed 15 to 25 percent to their household income6. Women increased their white-collar jobs at a faster rate than men during the 1970s, but by the end of the decade they were still at the bottom of wage scale. It is a fact that after World War II, in the first two decades the United States economy grew at such a scale that it has changed American society and its standing in the world as a superpower. The wealth generated in those post-war years had been used in the development of the country's infrastructure. The advances in living standards, schools, research, training for engineers and scientists and improved farming techniques as well as the network of highways meant that America was transformed. The technological advances were not limited to provide consumer goods; they also made the American military machine the most advanced force in the world. America won the space race, but it failed to include its black race in their astronomical and earthly achievements. However, the scale of its economic and technological achievements was matched by the disruption in the social fabric of the nation as its inequalities and injustices were magnified. The implications of the divisions created by this skewed economic growth will have its effects in the centuries to come, in racial tension, in domestic crime and social trends, and internationally as American culture is adopted as an aspiration for a globalise and consumer-centric world. ...read more.