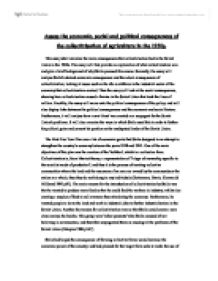 Assess the economic, social and political consequences of the collectivisation of Russian agriculture in the 1930s.

Collectivisation also had a dramatic effect on the Soviet Union socially as well as economically. As aforementioned, collectivisation was used to move resources from the rural areas to urban areas, thus 'sucking the agricultural economy dry' to allow rapid industrialisation. However, there was no real surplus created to expend on industry, and much grain was seized by the state. In the Ukraine alone, after 1935, the state was able to buy grain at an extremely discounted price, and seize over half of the output from farms and sell "at higher prices in the cities, to the peasants themselves, and abroad" (Encyclopedia of Ukraine 2001) . This was a frequent occurrence across the Soviet Union, and thus resulted in famine in the countryside. Although there were significant positive consequences of collectivisation, these came in exchange for huge human sacrifice, and collectivisation is considered as the main reason for the drastic famine, which was a major social consequence in the Soviet Union. The famine in the Soviet Union occurred in the early 1930s and resulted in the deaths of millions, particularly in the farming areas of the Soviet Union, including areas such as the "Ukraine, the Volga Valley, the Northern Caucasus region, and Kazakhstan" (Engerman 2003 p194). Overall there was an estimated "eight and a half million victims of famine" (Ellman 2005 p828). ...read more.

Thus this can be seen as being beneficial to the economy had they not been eliminated, as before the revolution the kulaks had been responsible for"38% of the country's grain output" (Lewin 1966 p190). Conclusively, collectivisation enjoyed some successes, such as the increase in grain procurement. However, overall the consequences were mainly negative and lead to a famine that killed millions and an unnecessary terror on the kulaks, which eliminated some key business minds and thus was a negative consequence in all three aspects discussed in this essay. Furthermore, not only did collectivisation lead to the deaths of millions, but it also affected the livestock numbers and crops greatly, as livestock was slaughtered or died due to lack of feed on the farms and crops were burned as opposed to being handed over to the state. Additionally, although in theory the goal of collectivisation to move the workers in rural areas to new industrial roles seems perfectly reasonable to achieve rapid industrialisation, this was evidently not the case as they were untrained for new jobs and thus collectivisation produced an idle workforce. Therefore it is evident that the majority of the consequences of collectivisation were negative and was thus should have been planned more thoroughly before proceeding, and the policy of collectivisation "was a crusade as much as a revolution" (Davies cited by Millar 1982 p63). ?? ?? ?? ?? ...read more.