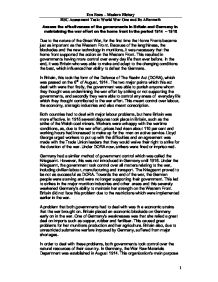 Assess the effectiveness of the governments in Britain and Germany in maintaining the war effort on the home front in the period 1914 - 1918.

Assess the effectiveness of the governments in Britain and Germany in maintaining the war effort on the home front in the period 1914 - 1918 Due to the nature of the Great War, for the first time the Home Fronts became just as important as the Western Front. Because of the lengthiness, the blockades and the new technology in munitions, it was necessary that the home front supported the action on the Western Front. This resulted in governments having more control over every day life than ever before. In the end, it was Britain who was able to make and adapt to the changing conditions the best, which influenced her ability to defeat the Germans. In Britain, this took the form of the Defence of The Realm Act (DORA), which was passed on the 8th of August, 1914. The two major points which this act dealt with were that firstly, the government was able to punish anyone whom they thought was undermining the war effort by striking or not supporting the governments, and secondly they were able to control any areas of everyday life which they thought contributed to the war effort. This meant control over labour, the economy, strategic industries and also meant conscription. Both countries had to deal with major labour problems, but here Britain was more effective. In 1915 several disputes took place in Britain, such as the strike of the Welsh coal miners. Workers were unhappy with the wartime conditions, as, due to the war effort, prices had risen about 110 per cent and working hours had increased to make up for the men on active service. Lloyd George urged workers to put up with the difficulties and an agreement was made with the Trade Union leaders that they would waive their right to strike for the duration of the war. Under DORA now, strikers were fined or imprisoned. ...read more.

Another strengthening factor was the agreement which was made between the trade unions and the government, not to strike for the duration of the war, so Britain was able to maintain her munition production rates, when Germany's were dwindling. Another factor that needs to be taken into consideration when assessing the governments' effectiveness is the attitudes of the people on the home front. If people supported the war effort, then they were more likely to put up with difficulties at home. This is an area where Germany was not as strong as Britain, and eventually paid its toll as the civilian support of the war in Germany changed. This is where propaganda and censorship played an important role as it gave governments a way in which to control the attitudes of the civilians. The German government spent a great deal of effort on censorship. They had led the people to believe that they were fighting a defensive war against the Russians, French and British. However, in 1917 when Russia surrendered and Germany received a large amount of land from the Brest-Litovsk Treaty. This made it obvious to the people that the conflict had been offensive, which turned their support for the government. The propaganda methods used in Britain were more successful than those used in Germany. Its first objective was to recruit men. Appendix 1 shows an example of the recruitment propaganda, which the government used to play on the conscience of the men. Britain did not have conscription when the war broke out, and relied on voluntary conscription up until 1916 when it became necessary. An important part of the controlling of the home front was to make the civilians hate the enemy. Campaigns like this existed in both Germany and Britain. Britain was able to use Germany's invasion of Belgium as a way of making the Germans seem barbaric and ruthless, and an example of this is seen in Appendix 2, which shows a German soldier with an impaled baby on the end of his bayonet. ...read more.

One this other hand, in order to maintain their pride, it is possible that he is playing down the defeat of the Germans and the events which occurred around their demise. Another negative point of the source is what is not said by the General. He tells the Reichstag that the reason for Germany's defeat is because of the tanks introduced by the British and Americans. He does not speak of the weaknesses which was bringing down the German army from the beginning. In support of the document, its purpose is to inform the Reichstag of the situation on the Western Front. This would imply that he is delivering information that is necessary for the other political party leaders so they have an informed opinion on what is going on. Because of the audience of this source, it makes it a more reliable document than a speech to the German public would be, as the government was trying to censor the bad news that they had access to. In this speech, the General is also making assumptions on why the German army was not strong enough in defeating the enemy, by stating that it 'broke the morale of our people.' Once again, this is down playing the weakness of the German army, instead of coming out and saying they lost because they were weaker, he is suggesting that their defeat had a large amount to do with the loss of spirit of the men. For an historian, this source is useful as it shows the picture that was painted for the political parties of the Reichstag towards the end of the war. This shows the opinion of the German General, and what he delivered to the men of the Reichstag. The content of the source is mildly useful because when taking into consideration the context of the source, the events surrounding this speech would influence what he says and more importantly how he tells the Reichstag that Germany will be defeated. 1 Lloyd George, War Memoirs, Volume 1 Eva Buzo - Modern History HSC Assessment Task: World War One and Its Aftermath 1 ...read more.