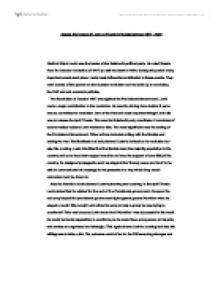 Assess the impact of Lenin on Events in Russia between 1917 -1924 Vladimir Illyich Lenin was the leader of the Bolshevik political party. He ruled Russia from the October revolution of 1917 up until his death in 1924. During this period many important events took place. Lenin made influential contribution to these events. They main events of this period are the October revolution and the build up to revolution, the Civil war and economic policies. The Revolution of October 1917 was against the Provisional Government. Lenin made a major contribution to the revolution. He was the driving force behind it as he was so committed to revolution. One of the first and most important things Lenin did was to release the April Thesis. This was the Bolshevik party manifesto. It consisted of several radical actions Lenin wanted to take. The most significant was the ending of the Provisional Government. Other actions included uniting with the Soviets and ending the war. The Manifesto not only showed Lenin's dedication to revolution but also his cunning. Lenin identified that the Soviets were the majority population in the country and so to have their support would be to have the support of over 80% of the country. ...read more.

They had insufficient military power to be able to dominate the whole of Russia. The Germans also occupied most of Western Russia, which halted their attempts to rule Russia properly. There was also still a very weak economy in Russia. There too were many groups vying to take power. One group of people were tsarist supporters who wanted a return to the old tsarist regime. This led to a civil war. The Bolshevik party won the civil war, which was in no small part due to Lenin. While fighting the civil war Russia were still involved in World War One. This meant that they were fighting an internal and external war at the same time. Russia was socially and economically drained at the time so could not fight both wars at the same time. One way in which Lenin influenced the war in favour of the Bolsheviks was by signing the Treaty of Brestlitvosk. The treaty was between Russia and Germany. It handed over significant amounts of Russian land to Germany. This included the Ukraine. However it also meant that Russia would not have to fight two wars at the same time and could focus on the internal civil war. ...read more.

It included 94% of industrial enterprises returning to private ownership. Also, the peasantry were permitted to dispose of any surplus they had from farming. This was seen as a step back for the Bolsheviks and Lenin it went against their communist values. Lenin left an important legacy after his death. One of the things in his legacy was the ban on factions. This meant no groups were allowed to form as way of preventing counter-revolution. His testament was also significant in criticizing Stalin's character however not leaving a clear successor. These two factors importantly helped Stalin to gain power in Russia as he used the band on factions to accuse rivals of being traitors and he used the no clear leader as a way of manipulating himself into power by saying he had changed from the man Lenin knew him to be. In conclusion Lenin made a major contribution to events in Russia between 1917 and 1924. Lenin's shrewd planning and commitment were the main reason for the Bolshevik victory. Also, his planning was behind the civil war victory. Finally his legacy left question marks in the Bolshevik party, which Stalin exploited. Altogether it could be argued that Lenin was the main contributor to events in Russia during this period as his actions had such a big impact on Russia. ...read more.