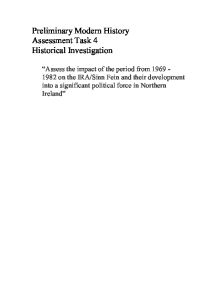 After a build up of tensions and a series of sectarian killings the ceasefire broke down in January 1976.16 It was clear that the original aims of the IRA leadership for a quick military victory were receding. It was acts of violence by British authorities that justified the military side of the movement and ensured tensions would continue for years to come. As Sinn Fein began to move into the political process so did many former revolutionaries and IRA members. One such person was Gerry Adams; after being in prison for alleged IRA membership17 he turned himself in a new direction a moved towards the political process. In 1978 he was elected as the vice president of Sinn Fein. This most likely came as a result of the realisation by many senior figures that it was becoming more and more unlikely that a military victory could be achieved. Whilst significant events such as b****y Sunday lead to anti-British sentiment to sky rocket many turned away from violence and embraced the political system. Protests by a number of imprisoned IRA members in Long Kesh gaol showed the power of political tactics, leading to the dominance of Sinn Fein as a political force. The 1981 hunger strike was the climax of a five year protest by Republican prisoners in Northern Ireland. The protest originally began in 197618 when the British Government removed its special category status for convicted paramilitary prisoners. This status had provided them with Prisoner of War privileges as specified in the Geneva Convention.19 Prisoners did not have to wear prison uniforms, do prison work and were allowed to be housed within their own paramilitary factions. They were also entitled to receive extra food parcels and have extra visits. When these rights were removed by the British Government, as recommended by the Gardiner Committee20, the prisoners began a protest to gain them back. It started with a blanket protest in which prisoners refused to wear uniforms but instead wrapped themselves in prison blankets; they stated that they were not criminals but political prisoners. ...read more.