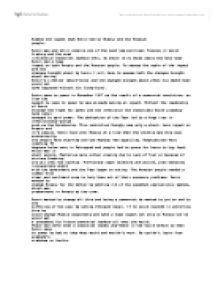 Assess the impact that Lenin had on Russia and the Russian people. Lenin was and still remains one of the most key political figures in world history and the most influential communist leaders ever, so there is no doubt about the fact that Lenin had a huge impact on both Russia and the Russian people. To assess the scale of the impact and the changes brought about by Lenin I will have to assess both the changes brought about during Lenin's lifetime (short-term) and the changes brought about after his death that could not have happened without him (long-term). Lenin came to power in November 1917 as the result of a communist revolution, so from the moment he came to power he was already making an impact. Without the leadership of Lenin through the fight for power and the revolution the communists would probably have never managed to gain power. The abdication of the Tsar led to a huge rise in revolutionary groups such as the Bolsheviks. This revolution though, was only a short- term impact on Russia and it's people. Lenin took over Russia at a time when the country was very poor economically, the people were starving and the weather was appalling. Temperatures were reaching 35 degrees below zero in Petrograd and people had to queue for hours to buy food, which was in short supply. Factories were either closing due to lack of fuel or because of strikes breaking out all over the country. Previously loyal soldiers and police, also becoming increasingly angry with the government and the Tsar began to mutiny. The Russian people needed a leader with clear and confident aims to help them out of their economic problems. ...read more.

To solve this problem Lenin ordered squads of soldiers and party officials to go into the villages and requisition food. The peasants didn't want to give away their land, which they had just been given and also were reluctant to sell their self- grown food. So the peasants resented this requisitioning, but due to the Cheka they had neither the power or right to complain. Despite the fact that the government had once had so much support, it was rapidly losing popularity, the people who had once supported it were now turning against it. Lenin had seen this happen to the provisional government, and didn't want it to happen again to his government. He knew that the communists would have to change their harsh policies to win back the support of the peasants and workers. Lenin's solution to this problem was to introduce a "new economic policy". Lenin introduced this in March 1921, and by doing this he had shown that he had accepted that not all communist ideas could be introduced all at once. To immediately change around almost every aspect of all his people's lives was too much at once. I think this helps to show the huge scale of the impact that Lenin had on Russia. But he was prepared to take a step back to win the support of his people. As a result of this new economic policy, the people started to grow more food because they could now sell it, so the economy began to improve, people could make profits and another impact that Lenin ensured was that there was continual support for the Communists. ...read more.

If people were too devoted to their religious beliefs, they were not thinking about the state enough. Lenin and Stalin believed that Russia had to come first, but this could not happen if people were too involved in their religions, so religion had to go. Thus, all religion was banned under the power of both men, however Lenin and Stalin differed in their beliefs in how religious groups should be treated. Stalin's treatment of religious groups was somewhat harsher than Lenin's. Comparisons and differences can also be seen between Lenin and Stalin in their characters. Both men had clear ideas and ambitions that they wanted to bring alive, but the difference in this characteristic is that Lenin was willing to come to a compromise. Lenin was willing to take a step back from his plans for what he considered to be for the good of the people and he showed this by introducing the NEP. Stalin though would never back down and would never compromise. He was much more stubborn than Lenin was. Another similarity in their characters can be seen in their ruthless dealing with opposition. Stalin murdered much of his opposition during his purges (KGB). While Lenin ensured that his opposition didn't pose a threat by getting rid of them during the red terror. But the most distinctive difference in this ruthless part of their characters is that Lenin only murdered opposition, while Stalin was paranoid and murdered many loyal Communists, to ensure enemies didn't exist within his party. It can be seen that although Lenin and Stalin were united in their beliefs and shared similar characteristics, there were of course differences and both men clashed on some of their ideas. This is probably because they both became Communists for different reasons, and had completely different childhoods. ...read more.