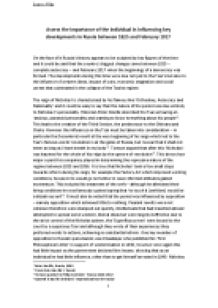 ﻿Jessica Ellis Assess the importance of the individual in influencing key developments in Russia between 1825 and February 1917 On the face of it Russia?s history appears to be sculpted by key figures of the time and it could be said that the country?s biggest changes came between 1825 ? complete autocracy ? and February 1917 when the beginnings of a democracy was formed. The developments during this time were due not just to the Tsar?s but also to the influence of western ideas, impact of wars, economic stagnation and social unrest that culminated in the collapse of the Tsarist regime. The reign of Nicholas I is characterised by his famous line ?Orthodoxy, Autocracy and Nationality? and it could be easy to say that the nature of the period was due entirely to Nicholas I?s personality. Historian Peter Neville described the Tsar as having an ?anxious, paranoid personality and wanting to know everything about his people?[1]. This lead to the creation of the Third Section, the predecessor to the Okhrana and Cheka. However the influences on the Tsar must be taken into consideration ? in particular the Decembrist revolt at the very beginning of his reign which led to the Tsar?s famous words ?revolution is at the gates of Russia, but I swear that it shall not enter as long as I have breath in my body?[2]. ...read more.

Historian David Christian argues that the ?timing and nature of the reforms depended on how particular politicians assessed the nature of problems?[6]. This suggests that the Tsar?s politicians had more influence than it would first appear in what had previously been a completely autocratic state. Alexander II?s other reforms included introducing the first form of elective government in Russian history ? the zemstva in 1864, although the voting was limited to the wealthy, and in 1870 this was extended to towns and cities. The Tsar?s government also introduced trial by jury. These were not decisions made by Alexander II alone, but he was the key individual that influenced the direction in which reform headed during his reign, leading to his nickname ?the Tsar Liberator?. There were many factors leading to the Emancipations of the Serfs, perhaps one of the most important was the impact of the Crimean war. The humiliating defeat at the hands of the British and French highlighted Russia?s backwardness and the weakness of her army ? Nicholas? generals appeared more concerned with the appearance of the men than with their actual training. The argument that reformation of the army required the abolishment of serfdom was given to Alexander II in 1855 in a memorandum written by Dmitrii Miliutin[7]. ...read more.

The impact of the Russo-Japanese war should not be underestimated; ?the news that Port Arthur had fallen proved to be just the catalyst?Russian society needed.?[9] Historian Peter Neville argues. The war undermined support for the Tsar?s regime and pointed out Russia?s weakness ? the humiliation causing more unrest against the government. The 1905 revolution forced the Tsar into action, creating the October Manifesto and the first Duma ? both of which would certainly not have come about had the revolution not happened. Another domino in the downfall of the regime was the First World War, although beginning with a huge rise in patriotism, Nicholas II and his government failed to govern competently and made a number of irresponsible decisions ? such as becoming commander-in-chief and leaving the Tsarina in charge during his absence - leaving the public with no one to blame but the Tsar. The downfall of the regime was not due purely to Nicholas II?s ineffectual rule; the key events leading to his abdication ? the Petrograd demonstrations and defection of the armed forces ? could not have been stopped no matter who was in power at the time. It was unfortunate that the current Tsar was rather weak willed and lacking in many areas, but his predecessors must take a portion of the blame. ...read more.