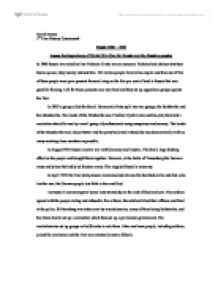 David Norton 5th Year History Coursework Russia 1905 - 1941 Assess the importance of World War One for Russia and the Russian peoples In 1900 Russia was ruled by Tsar Nicholas II who was an autocrat. Nicholas had advisors but they had no power, they merely advised him. 125 million people lived in his empire and four out of five of these people were poor peasant farmers living on the five per cent of land in Russia that was good for farming. Life for these peasants was very hard and they set up opposition groups against the Tsar. In 1903 a group called the Social Democratic Party split into two groups, the Bolsheviks and the Mensheviks. The leader of the Bolsheviks was Vladimir Ilyich Lenin and his party believed a revolution should be run by a small group of professionals using conspiracy and secrecy. The leader of the Mensheviks was Julius Martov and his party believed it should be run democratically with as many working class members as possible. ...read more.

On 3rd December 1917 a peace conference between Russia, Germany and Austria-Hungary was held at Brest-Litovsk, a town on the border with Germany. Trotsky was Russia's Foreign Affairs minister and he drew out the talks for nine weeks hoping for a social revolution in Germany because Russia had a socialist government and he thought this would bring the countries closer. No revolution occurred and Lenin knew he had to make peace as Germany had advanced very close to Petrograd. In March 1918 the treaty of Brest-Litovsk was made in which Russia lost all its western lands (Finland, Estonia, Latvia, Lithuania, Poland, The Ukraine and Georgia) and thus lost sixty-two million people (twenty-six per cent of the population), twenty-seven per cent of its farm land, twenty-six per cent of its railways and seventy four per cent of its iron ore and coal. Also there was a fine of 300 millions roubles to be paid to Germany. This was a very harsh treaty and Russia paid a great price for peace but it was Russia's only option if they did not want to be taken over by Germany. ...read more.