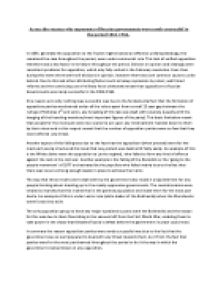 Assess the reasons why opponents of Russian governments were rarely successful in the period 1855-1964.

﻿Assess the reasons why opponents of Russian governments were rarely successful in the period 1855-1964. In 1855, generally the opposition to the Tsarist regime lacked an effective unifying ideology; this remained the case throughout the period, even under communist rule. This lack of unified opposition therefore was a key factor in its failure throughout the period. Division in opinion and ideology were consistent problems for opposition, which only fully united in the February revolution. Even then during this event there were still divisions in opinion, however there was one common cause to unite behind. Due to this and other attributing factors such as heavy repression by rulers, well timed reforms and the continuing use of military force ultimately meant that opposition to Russian Governments was rarely successful in the 1855-1964. ...read more.

This basic limitation meant that people for the most part were too scared to act upon any mistreatment handed down to them by their rulers and in this respect meant that the number of opposition parties were so few that they never offered any threat. Another aspect of this failing was due to the fact that the opposition (when present) were for the most part poorly structured this meat that any protest was dealt with fairly easily. An example of this is the Whites (who were the opposition to Lenins regime), who failed to form any kind of offence against the reds in the civil war. ...read more.

An example of this is under Lenins rule (while leader of the Bolsheviks) when the Mensheviks were forced into exile. The only opposition group to have any major sustained success were the Bolsheviks and the reason for this was due to them flourishing in the vacuum left from the First World War, enabling them to take power in the chaos that followed Russia?s defeat before the government in place could react. In summary the reason opposition parties were rarely successful was due to the fact that the government was so well prepared to deal with any threat towards them, be it from the fact that parties were for the most part banned throughout the period or be it the way in which the government cracked down on any opposition. ...read more.