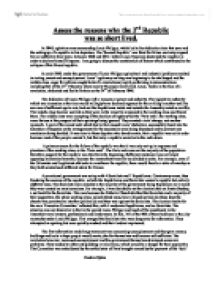 Assess the reasons why the 2nd Republic was so short lived.

Assess the reasons why the 2nd Republic was so short lived. In 1848, agitation arose surrounding Louis Philippe, which led to his abdication later that year and the setting up of a republic in his departure. The 'Second Republic' was fated for failure and only reigned for an ineffective four years- between 1848 and 1852- before Louis Napoleon destroyed the republic in order to declare himself Emperor. I am going to discuss the combination of factors which contributed to the collapse of this flawed republic. In early 1848, under the government of Louis Philippe agricultural and industrial problems resulted in rioting, unrest and unemployment. Louis' legitimacy as king was beginning to be challenged and the middle class, eager for reforms caught hold of a revolutionary spirit performing in demonstrations including that of the 23rd February, where nearly 50 people were killed. Louis, feeble in the face of a revolution, abdicated and fled to Britain on the 24th of February 1848. The abdication of Louis-Philippe left a vacuum or power and authority. The legislative authority which was in session at the time would willingly have declared regency for the ex-King's mother until his son was of sufficient age to rule, had not the Republicans inside and outside the Assembly acted so swiftly. ...read more.

Thus, the ending of National Workshops came around as they had cost the country a great deal of money and attracted the poorest of society from everywhere in Paris in efforts to receive handouts. Men were instructed either to join military service or go to Algeria to work. The Republicans motives were clear; they felt threatened by the large number of able-bodied poor in Paris and feared the only way to prevent a potentially revolutionary group was to disperse them into the army or to do work in various provinces, forcing them to comply if they objected. Their reaction was predictably infuriated at the audacity of the Republicans and 20,000 armed rioters took to the street in a resistance known as the 'June days' which was regarded as more commanding than the one that forced Louis-Philippe into abdication. The government was prepared to use any force that was required in order to crush the revolt. General Cavaignac, with calculated and cold-hearted efficiency brought upon his troops and begun the task of quiet literally 'clearing away' the barricades street by street. Troops roamed the quarters in which the barricades had been and killed anybody whom they thought had been involved in the fighting against them. Ironically, thousands of the protestors were imprisoned or deported to Algeria in the end anyway. ...read more.

The republican form of government had such revolutionary overtones inducing political, economic and social turmoil that it is not surprising that the men of property and power throughout Europe regarded Republicanism as a danger. The Second Republic had been established through public acclaim in Paris although had there not been a split of the Orleanists and the Legitimists and the Constituent Assembly a Republican constitution, then a Republic would never have emerged. Thus the republic had such few positive adherents that it was unlikely to survive any determined and well-organised attempt to overthrow it. The Second Republic failed to survive once a suitable solution had been found, in the Emperor of Napoleon. However, we should not credit Napoleon's rise to Emperor as all due to the situation; he had made skilful and determined use of all that had been handed to him. I believe the failure of the Second Republic to be one of inevitability as it was too diverse in comparison to the previous reign of the monarch, to be wholly accepted. A plethora of hindrances faced the success of the Second Republic but I believe it to be mainly due to 4 factors; the sparse support for the republic in the first place (only the Paris mob), the Republicans destroyal of their own reformation, the workshops, the French people's need for stability and Louis Napoleon's overriding determination for power, which was the 'final nail in the coffin'; of the Republic. Pandora Sykes ...read more.