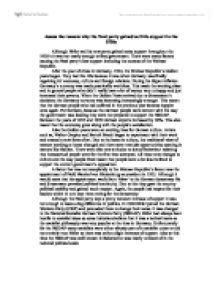 Assess the reasons why the n**i party gained so little support in the 1920s Although Hitler and his new party gained some support throughout the 1920's it was not nearly enough to face government. There were many factors causing the n**i party's low support including the success of the Weimar Republic. After the year of crisis in Germany, 1923, the Weimar Republic's Golden years began. They had this title because it was when Germany was finally regaining its' economy, culture and foreign relations. During the Hyper inflation Germany's currency was made practically worthless. This made the working class and in general people who didn't really have a lot of money very unhappy and just increased their poverty. When the Golden Years arrived due to Stresemann's decisions the Germany currency was becoming increasingly stronger. ...read more.

A factor that was not completely to the Weimar Republic's favour was the appointment of Field Marshal von Hindenburg as president in 1925. Although it would seem that his appointment would be a 'blow' to the German democracy He and Stresemann provided political continuity. Due to this they gave the country political stability and gained much respect. Again, the people had respect for their leaders which in turn kept them voting for the democracy. Although the n**i party kept a pretty constant increase of support it was not enough to make a big difference in politics. In 1920 Hitler joined the German Workers Party (GWP) and persuaded them to change their name. It was changed to the National Socialist German Workers Party (NSDAP). Hitler had always been hostile to socialist ideas so some historians believe that it was a tactical move as the socialist philosophy was very popular at the time in Germany. ...read more.

The German government reacted quickly and crushed the uprising killing 16 of Hitler's men. Hitler was jailed. Once again this created a poor reputation for the NSDAP in two ways. Firstly, the German people saw Hitler as a criminal as he had committed high treason. But, most importantly it showed to the country that he didn't have anywhere near enough support to take over a city never mind a whole country. This reinforces the argument of the NSDAP's fall of reputation. Due to the strengths of the Weimar republic in the Golden Years people did not feel the need to support another party as they were already happy. It was not till the very late 1920's and early 1930 are that the Weimar democracy reached its end, but until then the NSDAP kept a low support threshold. The NSDAP also did not really have a very good reputation due to their violent and very extreme SA. This private army caused great harm to the opposition and any foreigners including Jews. By Thomas Gunhouse ...read more.